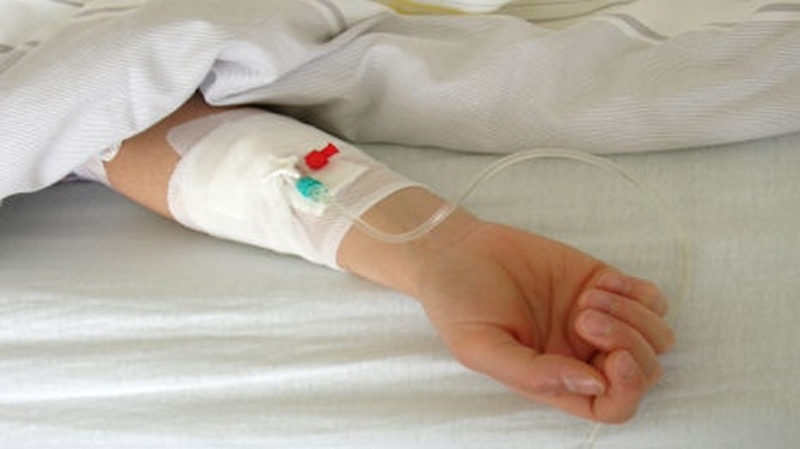 A patient is hooked up to an intravenous drip in this undated file photo.

VANCOUVER -- When Dr. Ellen Wiebe performed her first assisted death of a new legal era on Tuesday, she did it without the help of a nurse.

The Vancouver doctor, who has become a champion of the right to access medical aid in dying, inserted the IV herself. She has training in the procedure, but she lamented that it is nurses who are experts.

Late Wednesday, the B.C. Criminal Justice Branch issued guidelines for nurses and pharmacists to fill the vacuum while the federal Liberals' controversial Bill C-14 works its way through the Senate.

Before the government's announcement, Wiebe urged the British Columbia government to follow Alberta's lead and issue a directive stating criminal charges will not be pursued against medical teams who participate in aid in dying.

The Supreme Court of Canada gave the federal government until Monday to create legislation to allow for assisted death and British Columbia is now following the court's directive after the deadline passed.

But while doctors are clearly protected by the Supreme Court's judgment, known as the Carter decision, which struck down the Criminal Code provisions banning assisted death, nurses and pharmacists are not explicitly mentioned in the ruling.

Without legislation in place, the court's decision has become law, meaning it's no longer a crime for physicians to help end the lives of mentally competent adults suffering from a "grievous and irremediable" condition.

A statement from the Justice Branch, which is the body that determines if criminal charges are laid, said it recognizes that physician-assisted death may require the involvement of various health professionals.

The provincial government has already given legal weight to a set of standards created by the College of Physicians and Surgeons of B.C. to help make sure safeguards are in place to protect patients.

Wiebe applauded those standards, but said a requirement that the doctor be present until the patient's death has caused problems for patients who wish to die by oral medication, a process that currently takes up to six hours in Canada.

The College of Physicians and Surgeons of B.C. did not immediately respond to a request for comment.

In advance of the guidelines, the College of Pharmacists of B.C. had already advised pharmacists that the legal risk they face was small, because subsequent court judgments have found that pharmacists who participate in a physician-assisted death of an individual who meets the Carter criteria acted lawfully.

The college recommended pharmacists reflect on its guidelines and its new standards, which include confirming with the doctor the patient's eligibility for aid in dying. Pharmacists may also seek legal advice.

"My pharmacists are happy with their new guidelines," said Wiebe.

Before the Criminal Justice Branch issued its guidelines late Wednesday, the College of Registered Nurses of B.C. said it remained unclear what involvement nurses could legally have in assisted death and it was advising its members to avoid initiating discussions on the topic.

Cynthia Johansen, CEO and registrar of the college, wasn't immediately available to comment on whether the announcement made by the Criminal Justice Branch changes its advice.

She said earlier that the organization has standards, limits and conditions for nurses related to medical aid in dying that will go into effect when the federal legislation is in place.