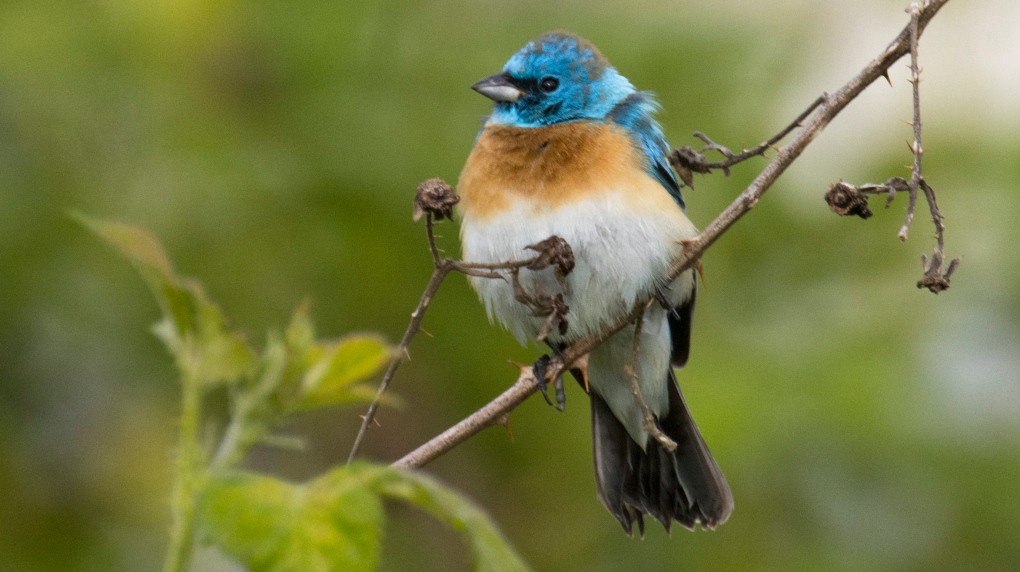 A migratory Lazuli Bunting bird seen in May 2020 in Colony Farm Regional Park, a part of which Trans Mountain plans to use as a construction zone for its pipeline expansion. (Photo from Lee Harding)

VANCOUVER -- Residents and environmentalists say they’re concerned that the Trans Mountain Pipeline is planning to use 11 acres of a Metro Vancouver regional park as a construction zone.

In November, Metro Vancouver signed a community benefit agreement for the Trans Mountain Pipeline to use a portion of the Colony Farm Regional Park in Coquitlam as a staging area for two years while it works on the pipeline expansion.

“It does host a lot of animals, birds, all kinds of wildlife, and I feel that those animals and those birds should have the space and it should be kept for them,” she said.

Walters, who frequently walks her greyhound dogs in the park, says the park is a “jewel” because it offers peace and quiet near a part of the city that’s home to 20 lanes of highway traffic.

Colony Farm park is located just north of the Fraser River, where Trans Mountain plans to expand its pipeline. The company says that it needs to use park space as a staging zone from which to bore a hole and lay new pipe under the river. After construction, it says it will remove all infrastructure and the space will be returned to the park.

In an emailed statement, the company says it explored “a number of options,” but due to its commitment to use thicker-walled pipe at river crossings, it now needs to use the park.

“Due to increased pipe thickness requirements for seismic stability and the location of the newly constructed Metro Vancouver watermain location, it is no longer practical to construct as originally planned,” reads a statement from the company.

Walters isn’t alone in her concern. There are more than 8,000 signatures on a petition against using the park as a construction zone, and members of the park’s citizens group are also concerned.

“It's one of the few remaining contiguous old field habitats in the Lower Mainland,” said John Saremba, a retired environmental scientist.

Saremba, a member of both the Burke Mountain Naturalists Society and the Colony Farm Regional Park Society, is one of a robust group of volunteers who survey the park several times per year for local plant and animal species. They’ve recorded more than 200 bird species that use the park, about 40 of which are migratory birds and some of which come only to Colony Farm park.

“They come for three to four weeks, and it's essential that they have access to food, and they are protected in this field,” he said.

Saremba isn’t happy about the decision to allow Trans Mountain to expand its use of the park, and says Metro Vancouver should have consulted with the Colony Farm Park Association before signing the agreement.

Metro Vancouver said it determined there was no other choice than to sign the agreement and allow access for pipeline construction on park land.

Neal Carley, general manager of parks and environment at Metro Vancouver, says the regional organization tried to defend the park, and asked Trans Mountain to look for alternatives.

“We don’t like using our parks in any other way than (to be) providing park space,” he said. “We really pushed Trans Mountain to look at alternatives, which I believe they did, but ultimately they came back and said, ‘No, we have to use this space.’”

Carley says that after Metro Vancouver refused Trans Mountain’s second request, the company said it would apply to the Canadian Energy Regulator, formerly the National Energy Board, and ask it to overrule and allow the company to use the park.

Once owned by Kinder Morgan, the Trans Mountain Pipeline was purchased by the federal government in 2018 for $4.5 billion. The highly contested pipeline faced strong opposition from some First Nations and environmental groups. Construction costs have since ballooned from about $7 billion to $12.6 billion.

Staff and negotiators for Metro Vancouver looked into previous CER rulings, Carley said, and concluded that the regulator would likely side in favour of Trans Mountain.

The project has strong support from Justin Trudeau’s Liberal government.

“They make decisions based on the national interest,” Carley said. “Our chances of (Trans Mountain) not using the park were very, very slim.”

It was at that point that Metro Vancouver decided it would head to the negotiating table. Had the issue gone to the regulator, Carley says he believes the district would have received anywhere from $300,000 to $400,000, but by negotiating directly, Metro Vancouver is said to have secured a better deal.

According to Trans Mountain, the community benefit agreement will see Trans Mountain “invest up to $1.4 million” in the park land.

Carley said he’s “cautiously optimistic” that in the long term the park “will actually come out better than it was,” because part of the agreement is for the park to be returned to Metro Vancouver with improvements.

Carley said he understands that Coquitlam residents value the park and aren’t wanting the construction.

“It is a sanctuary in the middle of a quite developed area,” he said.

“This is a tough decision for us,” he said. “Given the regulatory process involved, we felt that this was the best we could do.”

But Saremba isn’t convinced it was the right decision, and wonders where the migratory birds will land when Trans Mountain is occupying their space.

“What's going to happen for the next two years when we have all this construction work going on?” Saremba said.

A previous version of this article incorrectly stated Colony Farm park includes a waterfront area on the Fraser River. That section where the Coquitlam and Fraser rivers meet is part of the Coquitlam River Wildlife Management Area, which is managed by the province.

Colony Farm's waterfront space is on the Coquitlam River only.