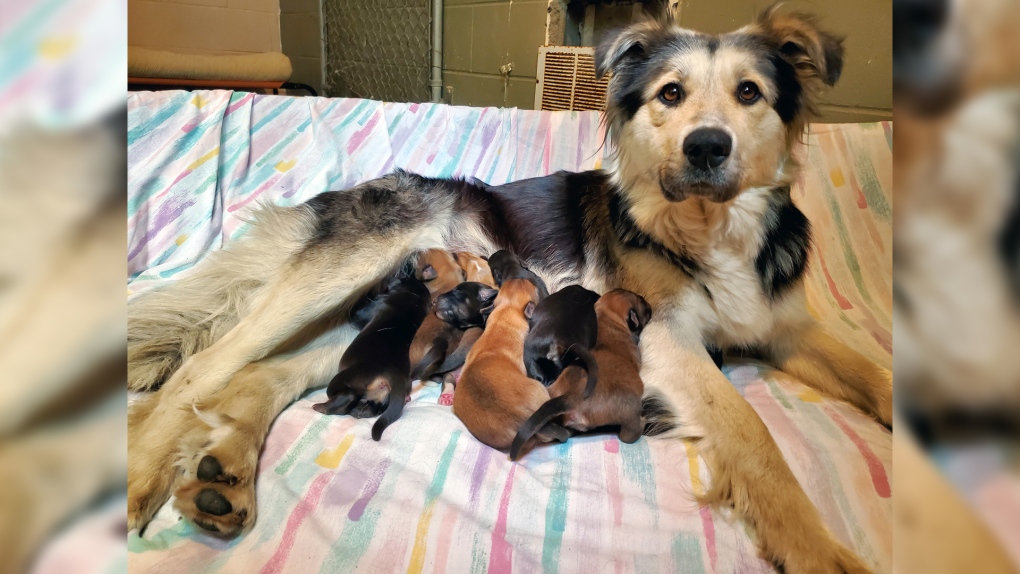 Rescued dog Casey and her puppies are seen in this photo provided by the BC SPCA.

The BC SPCA is asking for the public's help as it searches for the person who abandoned a mother dog and her puppies at a garbage dump near Williams Lake.

According to the organization, a Good Samaritan found the dog, who SPCA staff have named Casey, and her nine puppies inside a sealed box at the Puntzi Lake Landfill last Wednesday.

“There is no excuse for simply walking away from a pet and leaving them to die,” SPCA spokesperson Lorie Chortyk said in a statement. “Abandoning animals is against the law and individuals can be prosecuted for their crime.”

The SPCA said the dogs were taken to a vet where they spent the night before being transferred to the organization's Quesnel branch because there was no foster home available in Williams Lake.

Staff say Casey is about a year old and is believed to be a border collie-husky mix, adding that she's a bit thin but is focused on caring for her four female and five male puppies, which are about a week old.

The puppies will be ready for adoption once they are seven weeks old and can safely leave their mother, the SPCA said.

In the meantime, the shelter is asking for donations such as puppy pads, teething toys and small collars.

"There is help available for pet guardians who are struggling to care for their animals," Chortyk said. "They can reach out to a local rescue or the SPCA instead of abandoning them."

Those interested in donating or adopting are asking to contact the branch at 250-992-7722 or visit in person at 1000 Carson Pit Road.