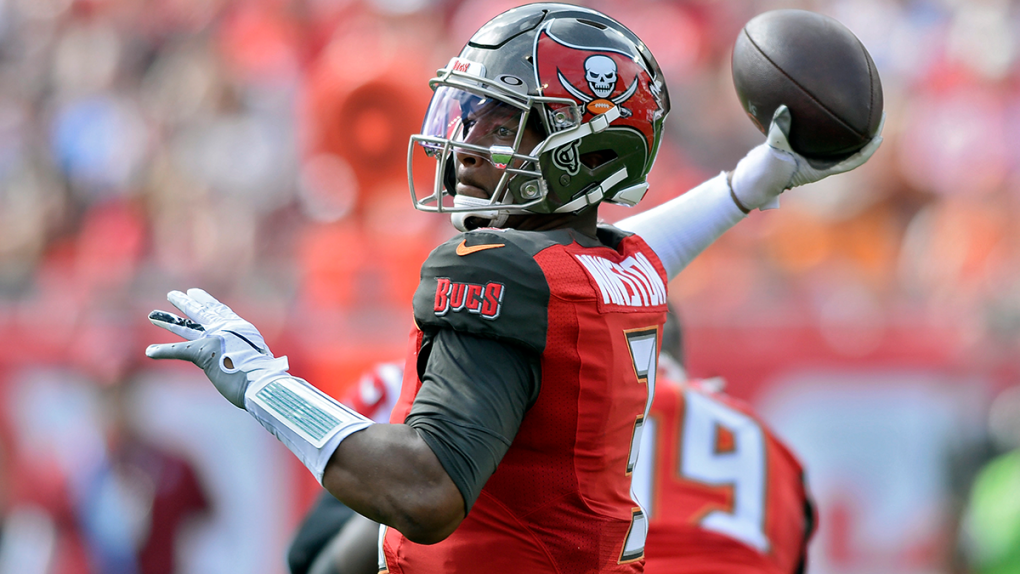 Tampa Bay Buccaneers quarterback Jameis Winston (3) fires a pass against the Atlanta Falcons during the first half of an NFL football game Sunday, Dec. 29, 2019, in Tampa, Fla. (AP / Jason Behnken)

With one last bad throw to close out the season, Jameis Winston became part of his own one-man club.

Winston threw a pick-six on the first play of overtime Sunday to send Tampa Bay to a 28-22 loss to the Atlanta Falcons, and with that throw, also become the first NFL quarterback to toss at least 30 touchdowns and 30 interceptions in the same season.

Winston, who led the league in picks and was second with 33 touchdowns, also became the eighth player to surpass 5,000 yards passing in a season. But more than the yardage, his year will be remembered for wild inconsistency that ended in the Bucs missing the playoffs for the fifth year of his five-year stay in Tampa.

Among the more twisted angles to Winston's off-target stay in Tampa: The last pass he threw during his five years with the Bucs was the same as the first - an interception returned for a touchdown. Next, the team has to decide if the 25-year-old, who was picked first in the 2015 draft, is the quarterback of the future or if it's time to part ways.

Coach Bruce Arians might have summed it up best after the game when he said Winston does "so much good and so much outright terrible."

In case you missed it, here's the rest of the best (and worst) from the last day of the 2019 regular season:

ANOTHER CLUB: Christian McCaffrey became only the third player to hit 1,000 yards rushing and receiving in the same season. It puts the Panthers tailback in the company of Roger Craig and Marshall Faulk. But Carolina lost 42-10 to the Saints and finished the season at 5-11. The Panthers lost Cam Newton to an injury this season and also fired coach Ron Rivera in the middle of the campaign. McCaffrey didn't dance around the realities his team faces despite his personal success. "We would love to get this thing fixed and fixed quick," he said.

NOT YOUR DAD'S RUNNING TEAM: The Ravens broke a 41-year-old record and became the NFL's most prolific single-season rushing offence. They finished with 3,296 yards on the ground this season, breaking the mark previously held by the 1978 Patriots. Of course, the Ravens and the '78 Patriots, who won their division but lost to Houston in the playoffs, have virtually nothing in common. With QB Lamar Jackson running the read-option out of a modified shotgun formation, Baltimore is redefining what an NFL offence can be. As it turns out, Robert Griffin III runs the offence pretty well, too. With RG III playing for Jackson, who was on the bench Sunday because the Ravens had already sealed the top seed in the AFC, Baltimore ran for 223 yards in a 28-10 win over the Steelers.

MINSHEW MANIA: It's back. Gardner Minshew gave Jaguars fans something to look forward to over the long winter. He threw for three touchdowns in Jacksonville's 38-20 win over Indianapolis to close the season. The sixth-round draft pick, who first got the starting job after Nick Foles broke his collarbone in the season opener, overcame some mid-season struggles to finish the season with 3,125 yards and 19 touchdowns. He went 6-6 as a starter (the Jags finished 6-10) and could provide stability at quarterback if Jacksonville is willing to give up on Foles and his $88 million contract (No sure thing).

FREDDIE FIRED: They were the preseason's most-hyped team and the regular-season's most disappointing team. And now, the Cleveland Browns are in search of their sixth coach since 2013. Not long after the Browns fell 33-23 to terrible Cincinnati to finish at 6-10, they booted Freddie Kitchens as head coach. Kitchens' hiring was viewed as a surprise by many and he was widely cast as over-matched - and potentially the biggest problem on a team with a talent-filled roster headlined by quarterback Baker Mayfield. The next coach will be tasked with taking all that talent and ending the NFL's longest playoff drought, which reached 17 years this season.