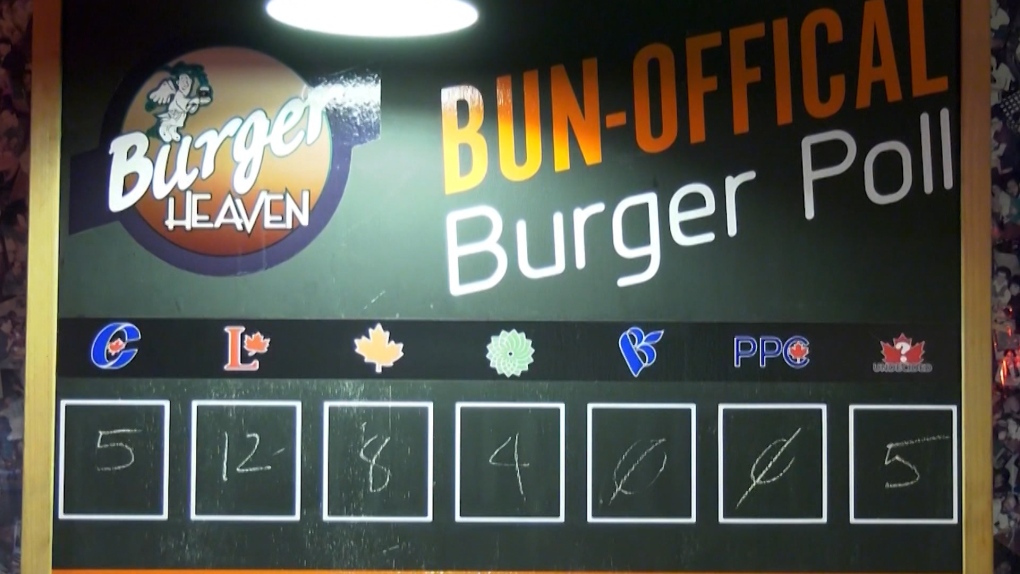 Burger lovers can share their political leanings by selecting a burger representing the federal party leaders.

VANCOUVER - For the past 28 years, Lower Mainland burger lovers have not only cast a vote for politicians, but have also picked their favourite candidate burger during election seasons.

New Westminster's Burger Heaven is back with its "bun poll," to see which way Canadian voters are leaning. Each federal party leader is assigned a burger meant to represent them in a tongue-in-cheek way.

"It started off 28 years ago as kind of a gimmick," Chris Geib, general manager of Burger Heaven, told CTV News Vancouver. "We do a little take on each of the candidates that are out there as of right now, do a little play on words using food ingredients."

"For the most part people take it as what it is – it's just a play on words," Geib said. "We do get some people from time to time who take it seriously, we've had a couple walk out one year because they decided they weren't on the same political spectrum."

For NDP leader Jagmeet Singh's burger, there are plenty of onions – meant to represent unions – a juicy tomato and a slice of Scarborough orange cheddar, all served on a multigrain bun.

Elizabeth May's Green Party burger is served as a lettuce wrap with dollops of green relish, mayonnaise, organic tomato and home-grown Saanich feta cheese. Burger Heaven says it's "cooked in a controlled carbon-free area on a back burner."

Both Maxime Bernier and Yves-Francois Blanchet have burger representations as well, complete with Bernaise sauce and French dressing respectively.

For those who haven't decided where their vote will go just yet, any other burger option will count as an undecided vote.