Newly released documents that include handwritten notes from RCMP officers and customs agents involved in the questioning and eventual arrest of Huawei CFO Meng Wanzhou last December will form a critical part of her defence team’s argument to get her extradition proceedings stayed.

In court filings that argue for a judge to compel Crown and other government agencies to disclose additional evidence she could use to fight a U.S. extradition request, Meng’s defence team alleges that Canada Border Services Agency (CBSA), RCMP, and U.S. authorities, including the FBI, “carried out a plan to unlawfully detain, search and interrogate” the executive, describing what occurred on Dec. 1, 2018 as a “covert criminal investigation.”

Meng’s team argues that the three hours their client spent being questioned and having her bags searched by CBSA officers prior to her arrest by the RCMP were a violation of her Charter rights, and that CBSA officers went on what amounted to a fishing expedition to find evidence to share with U.S. authorities.

Crown is expected to respond to the new filings in mid-September. In their response to Meng’s previously filed civil lawsuit, which also alleged her Charter rights were violated, both RCMP and CBSA repeatedly denied any wrongdoing.

The Huawei CFO is facing bank fraud and wire fraud charges under U.S. law. American authorities allege she misrepresented Huawei’s ownership of a Hong Kong-based subsidiary in order to circumvent U.S. sanctions on Iran. Huawei and Meng Wanzhou have denied all the charges.

Did the arrest plan change?

According to the records released by the court that are part of Meng’s defence team’s submission, the initial plan formulated the day before Meng arrived in Canada appeared to be to arrest the Huawei executive on the plane when her Cathay Pacific flight landed from Hong Kong.

But notes from RCMP Sgt. Janice Vander Graaf from the next day indicate that plan had changed: “CBSA will check passports and escort to screening,” she wrote in her notebook, adding CBSA “will locate phones as per FBI request and place in mylar bags.

Vander Graaf’s notes also indicate she was at the gate when Meng’s flight arrived with at least one other RCMP officer, and followed Meng and the CBSA officers as they detained and escorted her to screening.

Meng’s defence team points out in their disclosure application to the court that the arrest warrant called for an “immediate arrest,” which did not occur.

Customs agent questions Meng about her business dealings with Iran

The search of Meng Wanzhou’s luggage and her questioning by CBSA agents, some of which was captured on newly released surveillance video, took approximately two-and-a-half hours.

The video is silent, and at times Meng appears to stretch or lean and sit on the edge of the inspection counter.

But a sworn statement by the acting superintendent of the CBSA at the airport that day reveals Meng was asked questions both about Huawei, and the company’s dealings with Iran. 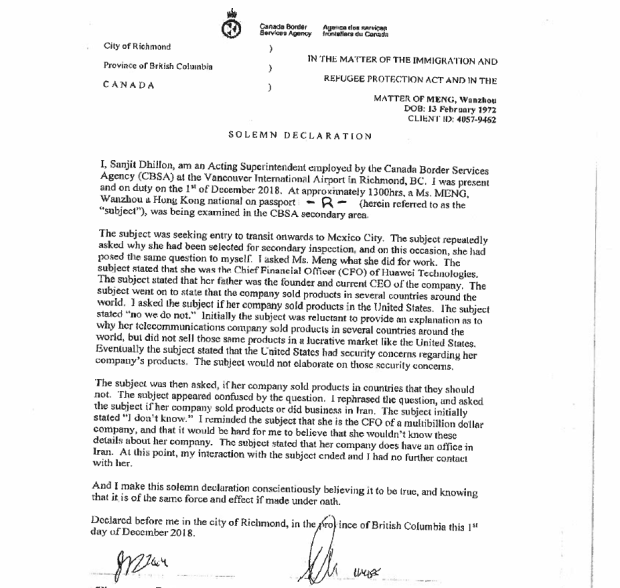 “[Meng] was then asked, if her company sold products in countries that they should not. The subject appeared confused by the question,” wrote Acting Supt. Sanjit Dhillon.

“I rephrased the question, and asked [Meng] if her company sold products or did business in Iran. [Meng] initially stated 'I don’t know.'"

Later on, Dhillon wrote, “[Meng] stated that her company does have an office in Iran.”

Records show it was approximately a half-hour after that questioning that CBSA complete their search, and handed Meng over to RCMP, who arrested her, read her the U.S. extradition request, and her Charter warning, at which point Meng asked to speak to a lawyer.

In their argument to the judge, asking for her to compel Canadian and U.S. authorities to disclose all their communications related to Meng Wanzhou’s case, Meng’s defence team implies that U.S. authorities, including the FBI, were pulling the strings behind the scenes.

The CBSA didn’t tell Meng about the arrest warrant, her lawyers argue, even when the documents say she repeatedly asked why she’d been referred to immigration and customs screening.

“The only rational conclusion in these circumstances,” Meng’s defence team wrote,“ is that the CBSA knew that if they arrested the Applicant pursuant to the Arrest Warrant, they would have to give her a Charter warning including her rights to silence and to contact counsel.”

Meng and her lawyers are due back in court in September for eight days of hearings where they will argue their application for additional disclosure.

They have also revealed they plan to argue the case is political motivated, that there is insufficient evidence, and that the crimes Meng is accused of committing in the U.S., do not constitute a crime in Canada, a requirement for extradition.

Her extradition hearing is scheduled for January 2020.