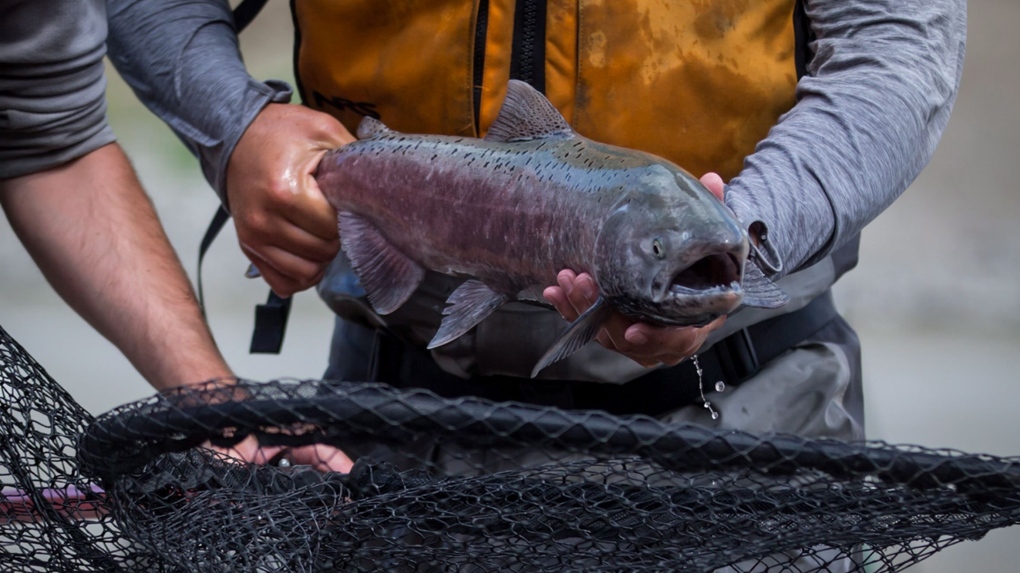 A salmon is placed in a vessel to be lifted by a helicopter and transported up the Fraser River past a massive rock slide near Big Bar, west of Clinton, B.C., on Wednesday July 24, 2019. Helicopter airlifts of migrating salmon have been temporarily halted at a rock slide in British Columbia's Fraser River because officials say large numbers of fish are now getting past the obstruction on their own. THE CANADIAN PRESS/Darryl Dyck

LILLOOET, B.C. - Experts say crews working to create a passage for migrating salmon following a rock slide on the Fraser River in British Columbia are dealing with some of the most difficult engineering challenges since a similar incident in the province over a century ago.

Corino Salomi, the environmental lead on the project involving provincial, federal and First Nations officials, says a slide in the Hell's Gate area of the river during construction of the Canadian Pacific Railway in 1914 posed similar problems to the one discovered in June near Big Bar.

He says engineers have reached out to the United States Army Corps of Engineers for advice and the army confirmed the team is “doing the right thing” in dealing with a slide that is much larger than others.

However, he says the scale of the slide that is believed to have occurred last fall requires difficult technical work in a remote location where crews must use ropes to rappel more than 100 metres down to the water's edge.

Salomi says crews have moved and blasted rocks and created channels for fish to pass through but water levels are expected to drop and it's too early to determine the overall impact on salmon stocks.

He says the Fraser River is being squeezed through a relatively narrow corridor of about 75 metres but efforts involving federal, provincial and First Nations partners have allowed about 100,000 salmon to pass through naturally so far.

“Some portion of 1.5 million (pink salmon) may arrive to the slide but we don't know what that number will be and will continue to monitor that,” he says of the smaller species.

“We did have concerns that although the rock manipulation allowed sockeye and chinook to pass it wasn't certain that pinks would be able to pass. So, two days ago we applied tags and we are now seeing those tagged fish moving through.”

Salomi says about 50 per cent of the tagged pinks made it through on their own.

The management team working at the Big Bar landslide says 60,000 sockeye, chinook and pink salmon have been transported by helicopter.

Principal engineer Barry Chilibeck, an expert on fish passage and hydrology, says the Fraser River is a significant migratory route for five species of salmon, including coho and steelhead, which are expected to arrive soon.

“In terms of a river and fish passage and importance to Canadians and communities, there's nothing bigger than the Fraser,” he says.

Smaller, weaker pink salmon are expected to be transferred by helicopter and trucks if they are unable to swim past the slide on their own.