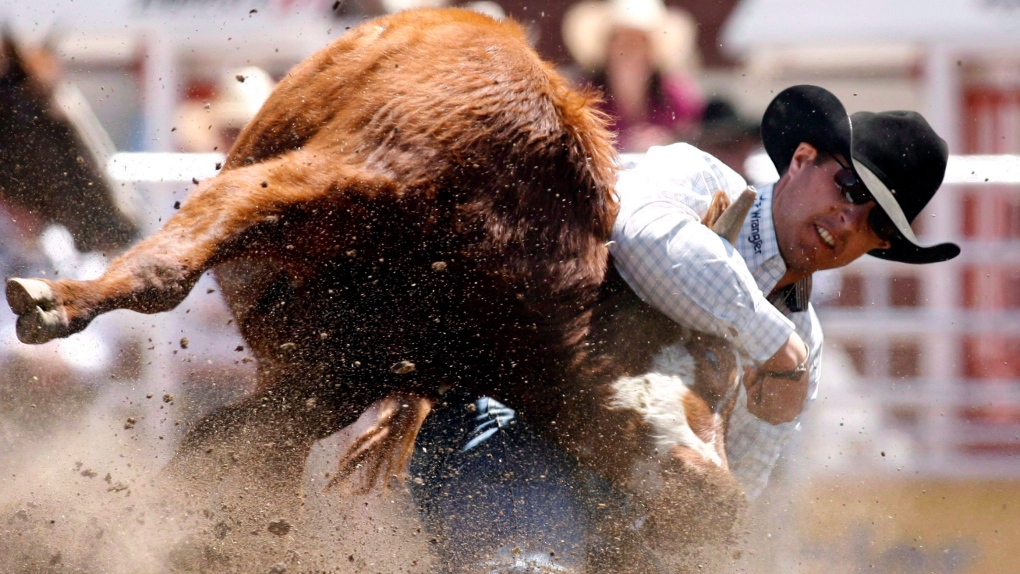 Trevor Knowles, from Mt. Vernon, Oregon, wrestles a steer during rodeo action at the Calgary Stampede, on July 3, 2009. (Jeff McIntosh / THE CANADIAN PRESS)

VANCOUVER -- Animal rights activists have slammed the decision to hold a rodeo during this weekend's Grey Cup festivities in Calgary, and it appears most British Columbians agree.

A new survey from Research Co. found a slim majority of B.C. residents – 53 per cent – disagree with the Canadian Football League's decision to organize a rodeo this year.

Only 31 per cent told pollsters they agree with the move, while 16 per cent said they aren't sure where they stand on the issue.

Opposition to the Grey Cup rodeo was highest in B.C. and Quebec, according to the survey, but the event was highly divisive even in Alberta.

Some 43 per cent of Albertans polled said they disagree with the CFL's decision to hold a rodeo, compared to 49 per cent who said they support the event.

Rodeos have been under intense scrutiny from animal rights groups for years, and the deaths of six horses at this year's Calgary Stampede certainly hasn't helped.

The Vancouver Humane Society organized a petition calling on the CFL to cancel this Saturday's rodeo event, and has gathered more than 3,200 signatures.

"Most Canadians are opposed to rodeo. They want family-friendly, cruelty-free entertainment to be part of national celebrations, not outdated spectacles of animal cruelty," the petition reads.

The latest Research Co. survey backs up that assertion as well. Pollsters asked people how they feel about using animals in rodeos generally, and found six-in-10 oppose the practice.

Research Co. conducted its survey online from Nov. 10-13 among 1,000 adults in Canada. The results have a margin of error of plus or minus 3.1 percentage points, 19 times out of 20.