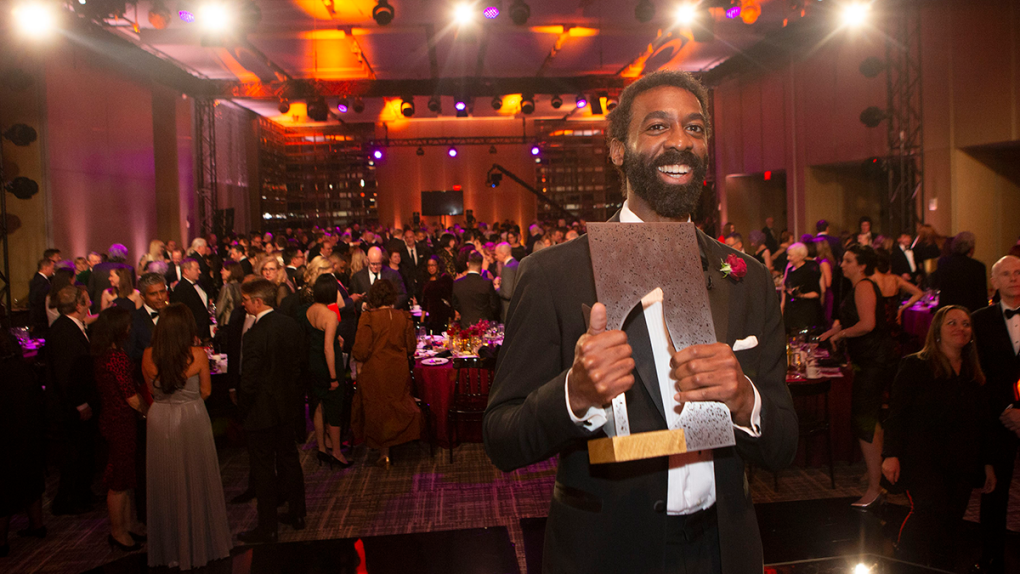 Ian Williams celebrates winning the 2019 Giller Prize for his book "Reproduction" at a gala ceremony in Toronto, on Monday, Nov. 18, 2019. (Chris Young / THE CANADIAN PRESS)

Williams choked back tears as he took to the stage to receive the honour at a glitzy Toronto gala on Monday night for "Reproduction."

"I've got notes here for people I need to thank, but maybe I'll just start with my heart first," Williams told the crowd. "Margaret Atwood over there is the first book I bought with my own money at a bookstore in Brampton."

In an interview after the ceremony, Williams said the shoutout felt like a small token of the debt he owes Atwood, having spent his childhood summers holed up with her poetry.

"How do you tell a writer that I feel like I've known you and you've been like my literary mother and you've been here for me this whole time?" Williams told The Canadian Press.

"I'm sure a lot of people feel this exact way about her, and she gives us this sense of pride as well. It's just so much she's done for this country."

The tale begins when a sober-minded teenager from a small island nation and the listless heir to a German family fortune meet in the hospital room where their mothers lay dying.

From there, Williams unspools a narrative so entangled it strains against novelistic convention.

Jury members praised Williams for his "masterful unfolding of unexpected connections and collisions between and across lives otherwise separated by race, class, gender and geography."

Still dazed from the win, Williams said it seemed like "all my pasts are alive in this moment. " He simultaneously felt like a six-year-old child in Trinidad, a nine-year-old boy going to school in Brampton, a university student and professor, and a 40-year-old writer being feted by some of Canada's foremost literary figures.

"I feel like I'm with the people that I care about and I feel like all of those people are right here in me," said Williams. "It's almost like when you're surrounded by family, but it's just yourself. It's just your own history."

The six finalists were picked from a long list of nominees, and titles by two former Giller winners didn't make the final cut - Andre Alexis' "Days by Moonlight" and Atwood's "The Testaments," her blockbuster sequel to 1985's "The Handmaid's Tale."

While "Reproduction" marks his debut novel, Williams has been a rising star in poetry circles. His 2013 collection, "Personals," was shortlisted for the Griffin Poetry Prize and the Robert Kroetsch Poetry Book Award.

He also conquered short fiction with his collection, "Not Anyone's Anything," which won the Danuta Gleed Literary Award in 2012.

Williams was the 2014-2015 writer-in-residence in the University of Calgary's distinguished writers program, and has held numerous other fellowships and residencies.

The Vancouver-based writer is currently a Griffin Poetry Prize trustee and associate professor of poetry in University of British Columbia's creative writing program.

Before the Giller winner was announced, a who's who of Canada's cultural scene walked the Giller red carpet at the Four Seasons Hotel in Toronto.

Giller executive director Elana Rabinovitch said this year's short list was distinct not only because there were six finalists instead of the usual five, but for the range of time periods, styles and geography the books represent.

"(The finalists) come from everywhere and these voices are strong and powerful and resonant," Rabinovitch said.

Atwood said she chose to celebrate her 80th birthday at the literary bash at Rabinovitch's behest.

"Elana made me do it," Atwood told reporters with a laugh.

As her global book tour for "The Testaments" winds down, Atwood said she's hoping to catch up on the latest Canadian reads.

"There's some interesting non-fiction books as well, and I would say quite a lot of fiction," Atwood said. "I haven't plowed my way through it, but I will."

"Happy birthday to you. You write such good books," Arden crooned. "Now Canada's famous for more than just maple syrup."

The Giller awards $100,000 annually to the author of the best Canadian novel or short story collection published in English, and $10,000 to each of the finalists.

This report by The Canadian Press was originally published Nov. 18, 2019.