Runners told to avoid Whistler trail due to 'aggressive' owl 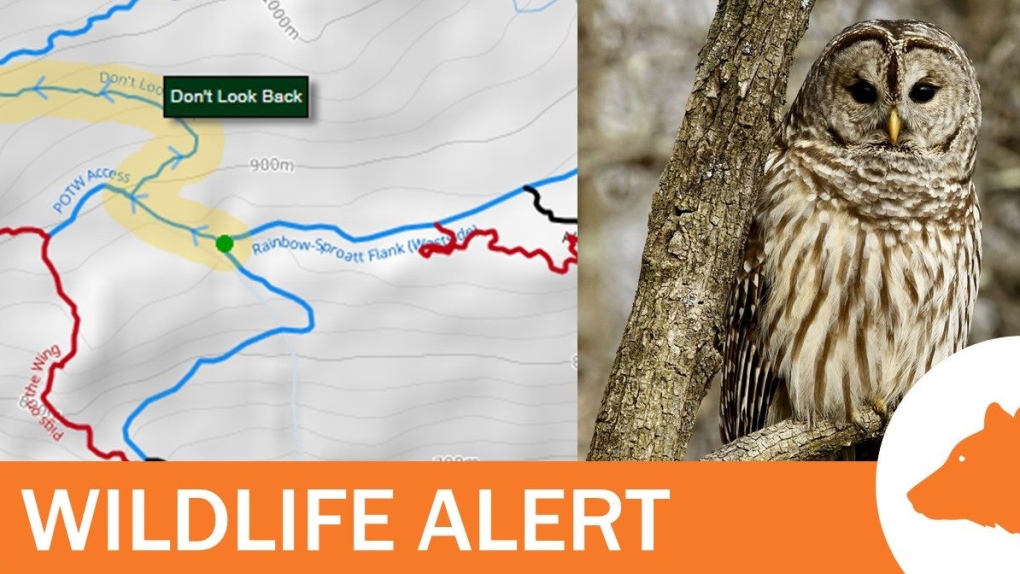 VANCOUVER – A startling owl attack at the Resort Municipality of Whistler has prompted a warning to hikers and cyclists to avoid a particular trail.

Officials said the victim was out on the Don't Look Back biking trail Monday, north of Function Junction, when an owl suddenly swooped in and "inflicted minor injuries."

Officials described the raptor as an "aggressive" barred owl, and closed the trail off for a week to give it some space. People have also been told to exercise caution on other nearby trails.

The incident was reported to the Conservation Officer Service, which noted that owl attacks are extremely rare in the region. Insp. Murray Smith told CTV News there is generally one incident reported per year in the Lower Mainland.

Monday's attack was also very minor, Smith said, even though the runner believed the owl's beak or talons made contact with their head.

"The runner wasn't badly hurt," Smith said. "There was no blood."

Barred owls are said to be less aggressive than great horned owls, and are generally nocturnal – though the B.C. government said they can be "active any time of the day, especially when supporting young."

Smith noted that it's not nesting season, and said he doubted the attack could be chalked up to protective behaviour.

"I think probably this would be more of a situation where the owl was spooked – it's roosting in a tree, the runner comes along, the owl takes flight and somewhere during that flight there was contact and a bit of commotion around the runner's head."

Anyone who sees wildlife acting aggressively can report incidents to the B.C. Conservation Officer Service at 1-877-952-7277.