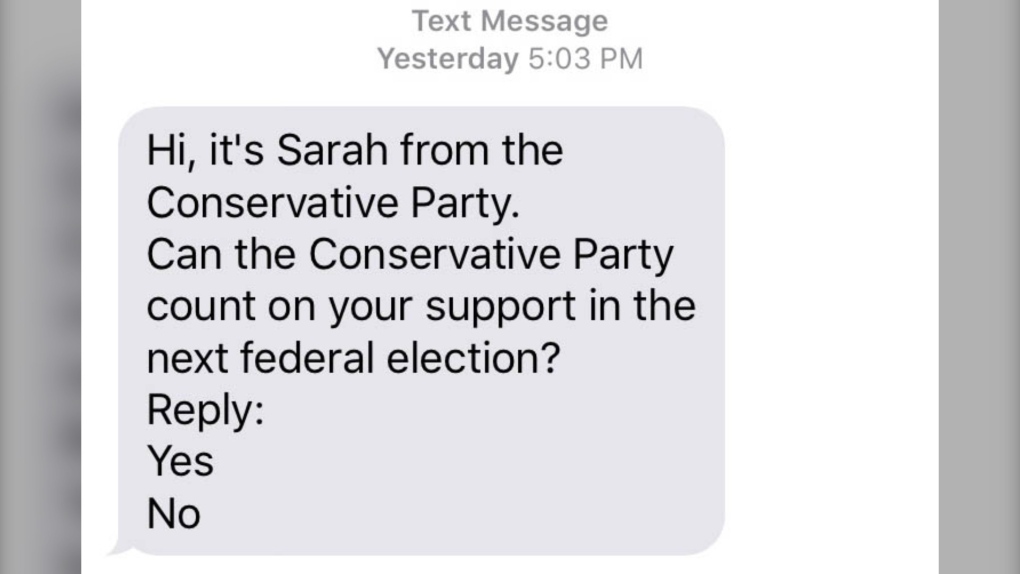 Some B.C. cellphone users received text messages over the weekend asking for their support of the federal Conservatives.

The texts came from a number with the B.C. area code 604, and asked recipients to respond "yes" or "no."

"Hi, it's Sarah from the Conservative Party," the messages read.

"Can the Conservative Party count on your support in the next federal election?"

The Tories, Liberals and New Democrats have all said they planned to use text messages to reach out to voters ahead of the Oct. 21 federal election.

In previous campaigns, parties have relied on tools including flyers, door-to-door visits and robocalls, but recent efforts include a variety of online tools.

The parties have promised to protect the information of voters who receive and respond to the messages, but some experts warn of a lack of oversight.

Mass text message campaigns have been used previously, including in July when members of a coalition called Canada Strong and Proud sent anti-carbon tax texts to residents of some parts of Canada.

Few details have been provided from Canada's largest political parties about how text campaigns will be used for the 2019 election, but the Liberal party told CTV News earlier this month they generally send messages to people who've already indicated their support.

On the party's website, the Liberals say they obtain personal information from Elections Canada's list of eligible voters, as well as from publicly available data sources and voter outreach.

Information is also saved if a voter signs a petition, registers with the party, makes a donation or subscribes to communications.

The party may also collect information from "a volunteer or friend who thinks you would be interested in getting involved," the site says.

More information about the party's policies on protecting and sharing personal information is available on the Liberals' website.

Similarly, the Conservatives have their privacy policy posted online, which states that, "Elections Canada provides all political parties with a list of electors, including names and postal addresses.

"We collect other information from publicly available data."

The policy says staff are trained on the use of personal information, but does not elaborate other than to say the training emphasizes appropriate collection and use.

The NDP told CTV previously that the party would text voters and volunteers, and that any messages would be in compliance with rules and privacy guidelines.

In its online outline of those guidelines, the NDP says it is committed to protecting personal information, and that the data is collected in the same ways the other parties listed.

"We use your personal information to communicate with you about the NDP, to provide you with news and informaiton about the NDP and our activities, and to contact you about your past and future donations and membership," the website says.