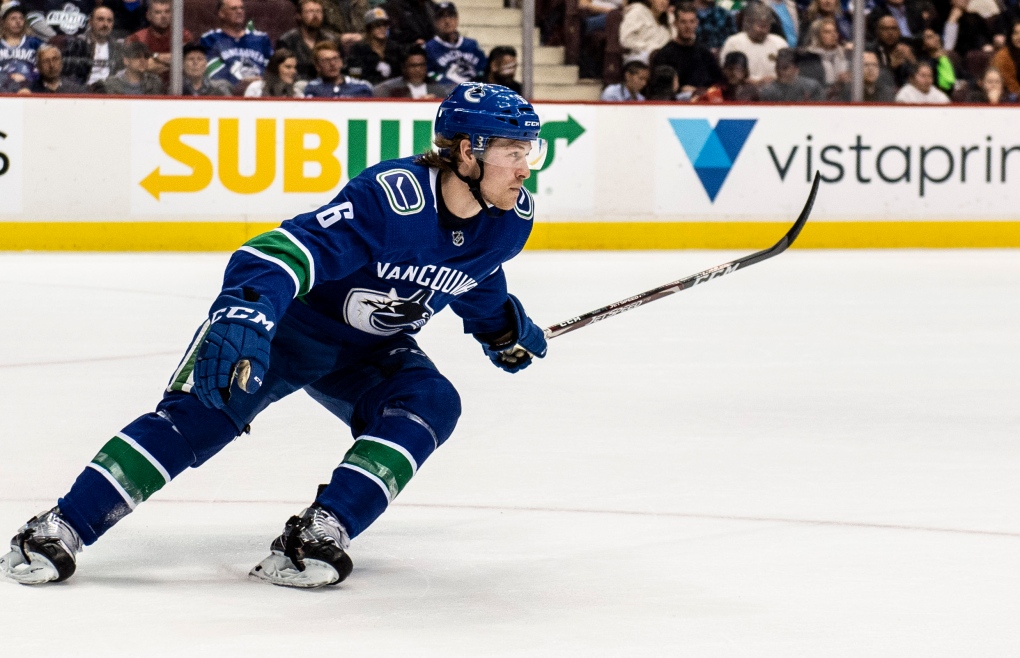 VANCOUVER - Brock Boeser wasn't expecting drawn out contract talks with the Vancouver Canucks this summer but the prolonged negotiations did have an upside.

As one of the NHL's many restricted free agents without a deal, the 22-year-old right-winger missed Canucks training camp in Victoria over the weekend while contract talks continued. However, the delay meant he was able to spend some more time with his dad, Duke, who's been hospitalized since suffering heart failure at the end of July.

“That meant a lot to me to be there,” Boeser said Wednesday, tears welling in his eyes. “That's kind of what kept me sane through this whole process, just being able to go see him each and every day, being able to support him.”

The past couple of months have been tough, he added, but his dad is making improvements every day.

Now Boeser is focused on making up for lost time with the Canucks.

On Monday, he signed a three-year contract worth an average US$5.875 per season and on Wednesday, he was back on ice with his teammates in Vancouver.

“It feels amazing,” Boeser said after the practice. “It was tough seeing those guys go to battle every day, getting in shape and working together. It is tough to watch that. Obviously, I want to be here super bad through the whole camp so I'm really glad it got done now rather than later.”

“It was great to see him in the locker room,” said centre Bo Horvat. “He had a big smile on his face. He's one of our core guys and it's nice to have him back in the room.”

The native of Burnsville, Minn., is considered one of the Canucks up-and-coming stars.

Originally picked 23rd overall by Vancouver in the 2015 draft, Boeser was an NHL All-Star Game MVP in 2018 and a finalist for the Calder Trophy in the same season, despite a broken back cutting short his rookie campaign.

Last year, he was Vancouver's third-leading scorer with 26 goals and 30 assists in 69 games.

Canucks general manager Jim Benning has said the club discussed both long and short-term deals with Boeser's camp, but found there was more common ground for something shorter.

Still, Boeser sees himself in a Canucks jersey well into the future.

“I love Vancouver. My plan isn't to just play three years and get out of here. My plan is to be here as long as I can,” he said Wednesday. “I love this city, I love the fans, I love the organization. So just take it year by year and hopefully I can sign a longer one after this.”

Despite missing training camp with his teammates, Boeser said he's feeling good, especially compared to this point last year when he was still working his way back from injury.

Being healthy this summer meant he got back to skating early and didn't let up, putting in work at his agent's camp, getting ice time in at his alma mater, the University of North Dakota, and logging hours with his skills coach.

“I pushed myself as hard as you can push yourself,” Boeser said. “I feel pretty good after that first (Canucks) practice. I think I'll just take it a day at a time, work my tail off and work my way back into shape.”

Green had no concerns about Boeser's fitness level as he re-joined the team, saying he looked good and strong.

That doesn't mean there isn't work to be done through the final two weeks of the pre-season, however, the coach added.

“It's vital for every player. But any time you miss the beginning of training camp, it's even more important,” he said. “It's nice that he's had a whole summer to train now. I'm expecting that we'll see a guy that's, like I said earlier, he's just ready to go, whereas the last year he was fighting a little bit.”

When, exactly, Boeser will be slotted into the lineup remains to be seen. The Canucks are about to embark on a pre-season road trip, visiting Edmonton on Thursday before playing the L.A. Kings in Salt Lake City on Saturday.

For now, the forward is simply readjusting to life in Vancouver and getting used to some new teammates, including forwards J.T. Miller and Micheal Ferland, and defencemen Tyler Myers and Jordie Benn, all of whom joined the Canucks over the off-season.

The new additions bring a hard work ethic to a young group that's looking to build and chase the playoffs, Boeser said.

“It's a different feel out there but it's a really good feeling,” he said. “Everyone's working their tail off so I'm just super stoked to be back and get going with the guys.”

This report by The Canadian Press was first published Sept. 18, 2019.