Bad roads leave some stranded on Mount Seymour until 4 a.m.

VANCOUVER -- What started as a fun day on the mountain turned into a long night for some Metro Vancouver skiers and snowboarders.

While the sudden blast of winter weather has been ideal for those heading uphill, a group trying to get down from Mt. Seymour in North Vancouver was stranded by bad roads.

Mount Seymour Parkway was treacherous Sunday night, and several vehicles were reported to have slid off the road. A collision shortly before 9 p.m. caused officials to shut down the area to traffic.

"Emergency services were on scene, but the continued heavy snowfall and freezing temperatures slowed the recovery of the vehicles."

Many who'd been at the ski hill during the day were stuck until around 4 a.m. Monday, when officials finally allowed vehicles to slowly make their way off the mountain.

While they waited, those who'd been stuck were offered free hot chocolate.

In the emailed statement, Kirkham thanked guests for their patience and for "keeping such high spirits."

Later on Monday the hill posted a reminder to drivers that all vehicles must be equipped with winter or M+S tires between Oct. 1 and March 31.

"Mount Seymour Road is a mountain highway and extreme weather can exist at any time," a graphic posted on Facebook by the resort said. 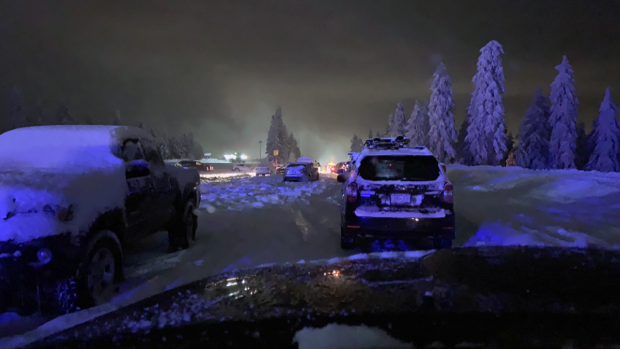