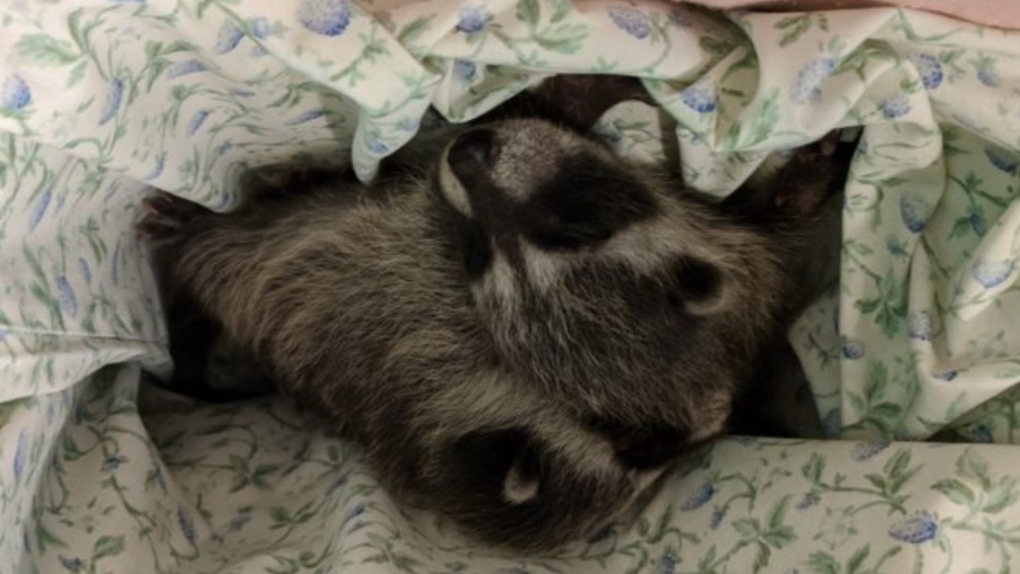 Baby raccoons are seen in a photo provided by the BC SPCA.

VANCOUVER -- Two tiny raccoons are now in the care of the BC SPCA after they were found crying out earlier this month.

It is believed an adult female raccoon was trapped and removed from the area, leaving her babies to fend for themselves.

The incident happened on southern Vancouver Island, but the SPCA says private citizens moving wildlife is a "relatively common occurrence across the province.

"With baby season in full bloom, this case serves as a timely reminder to all that relocating wildlife is not a permanent or humane solution and can lead to situations like this," said Andrea Wallace said in an email to CTV News Monday.

In the Vancouver Island case, the babies were found a few days later by a person who heard them crying out. They've since been brought to Wild ARC for care.

The centre says the raccoons have a "long road of care ahead," but officials hope they'll be able to release the kits by fall.

"When they first arrived their eyes and ears were still closed and they were dehydrated and very hungry," Wallace said in a statement.

"The raccoons are now being fed a specialized diet five times a day to ensure they get the nutrition they need to develop properly."

Their progress can be monitored through a web cam operated by Wild ARC.

The centre operates multiple cameras, and changes the view "when new animal action is available."

Those with questions about a wildlife issue can call the BC SPCA's provincial call centre at 1-855-622-7722 for advice.

Generally, the SPCA advises not to feed raccoons, and to remove potential food sources including garbage bins and composts.

Block access to vents and crawlspaces, and block off decks and porches so they can't get underneath, the society says. Motion-sensor lights and sprinklers can be used to scare them off.

The society recommends "mild humane harassment" for raccoons calling your property home through use of lights and radio. A one-way door can be installed, if possible.

If a humane trap is necessary, release the animal immediately outside the home, in case there are offspring nearby.

Rags soaked in apple cider vinegar can deter them, but if babies are present, the SPCA recommends waiting it out, if possible.

Raccoons that appear to be injured or orphaned should be taken to a wildlife rehabilitation centre for treatment.