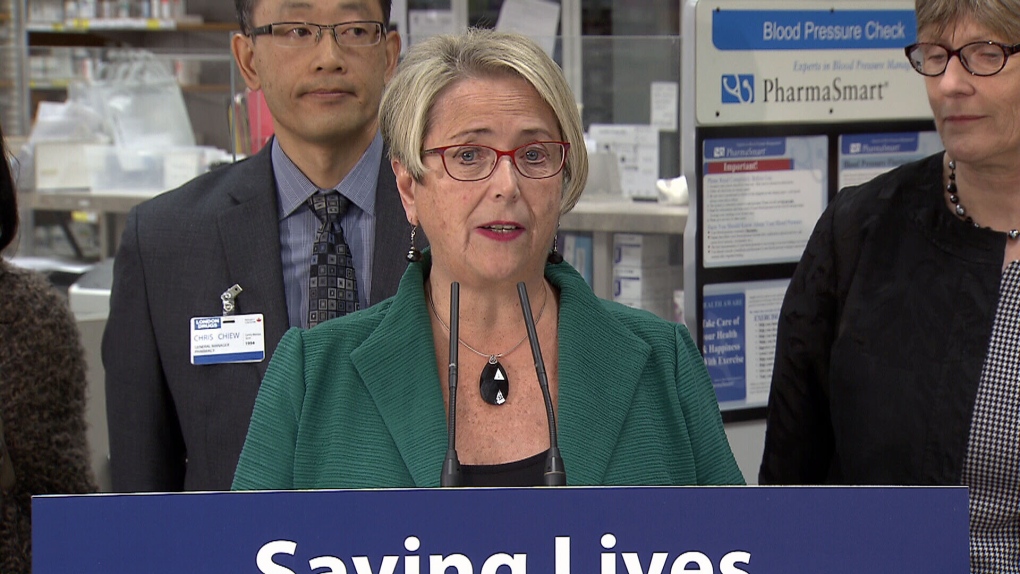 Mental Health and Addictions Minister Judy Darcy announced that pharmacies will supply free, take-home naloxone kits in partnership with the BC Pharmacy Association and the BC Centre for Disease Control.

Mental Health and Addictions Minister Judy Darcy announced the initiative in partnership with the BC Pharmacy Association and the BC Centre for Disease Control Wednesday morning.

"This year as we approach the holiday season, my mind, all of our minds, are with the 1,200 families who are grieving the loss of loved ones this year due to overdose," Darcy said. "The most heart-heartbreaking thing about all of this is that each of these deaths could have been prevented."

So far, 1,900 kits have been distributed to 220 pharmacies across the province including those in large chains such as London Drugs and Save-on-Foods.

The kits will be given to those who are likely to witness a drug overdose or use opioids themselves.

B.C. residents can speak to a pharmacist to find out if they’re eligible. To maintain privacy, any identifying information about those who receive a kit will not be tracked.

Naloxone is a drug that can reverse the effects of an overdose caused by opioids such as heroin, fentanyl and morphine.

According to the Ministry of Health, naloxone kits have been used to reverse more than 11,000 overdoses.

So far in 2017, nearly 30,000 take-home kits have been given out and the expansion of the program into pharmacies is part of the province’s $322-million investment over the next three years to address the overdose crisis.

"While [naloxone] can prevent brain damage and death, the program does much more. It empowers people who use drugs, it empowers their friends and their families," said Dr. Jane Buxton, BC Centre for Disease Control harm reduction lead. "Take-home naloxone kits aren’t meant to be used by medical professionals or emergency responders. You don’t have to be a doctor to actually use a kit and save a life."

Every pharmacy across the province is encouraged to participate. Naloxone kits are also available at harm-reduction sites, emergency departments, corrections facilities and First Nations sites.

By October, the number of overdose-related deaths in 2017 had already surpassed the 2016 total and the provincial government has continued to seek creative solutions to the dramatic increase.

Shortly before the Ministry of Mental Health and Addictions’ announcement, the BC NDP tweeted that the previous Liberal government ignored the overdose crisis until it was too late.

However, Darcy asked for the tweet to be taken down and apologized to the former health minister. Some critics say the tweet was inappropriate and that the entire province needs to work together to address the overdose crisis.

"It takes a province to turn the corner on this overdose crisis," Darcy said at Wednesday’s announcement. "I’m asking everybody to step up to the plate."

It appears the @bcndp may have deleted a tweet that some felt was offensive and did not accurately reflect the efforts of many to battle addiction challenges. I would like to commend the BC NDP for doing so. The opioid crises is one we all need to work together to resolve.

Meanwhile, it would appear the NDP is walking back the ill-judged tweet about the opioid crisis. The BC government did more on this issue than any other government in Canada, including the Fed Tories. https://t.co/VbP74xNiu8

Thank you to @DarcyJudy for the gracious phone call today and thanks to those who recognized the tireless work of health officials and governments in #bc fighting the opioid crisis.