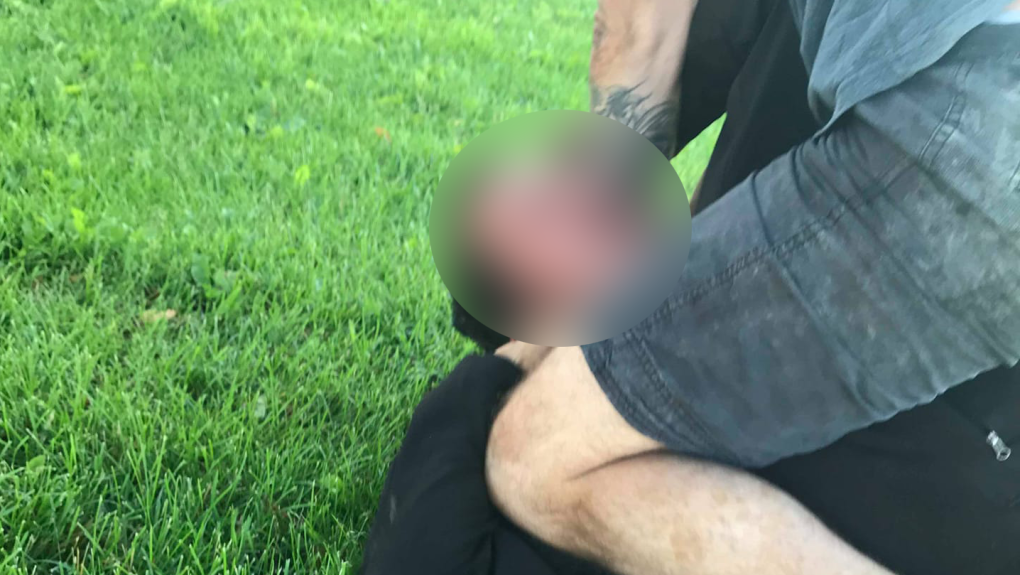 Chad Freeman pinned down the man he says stole his truck. (Chad Freeman)

Chad Freeman woke up Monday to the sound of his daughter urging him to get up – his truck was being stolen.

But before Freeman, a Kamloops resident and jiu-jitsu instructor, was able to do anything about it, the truck drove off, leaving him out a vehicle and valuable tools.

Five hours later, a friend came to his home claiming to have found his truck down the road.

Freeman, who fought in the Mixed Martial Arts league Bellator compiling an 8-6 record, leapt into action.

"I ran up to him, he was already sitting on the ground, and I put my knee on his stomach and pinned him down," he told CTV News Vancouver.

The man, Freeman says, started to reach into a pocket, forcing the martial artist to take it further.

"I didn't take any chances so I threw him a choke on him; we call it a lapel choke. I said 'if you move, I'll put you to sleep," he said.

Unfortunately, the man kept moving so Freeman says he choked him out.

RCMP showed up and arrested the man, with Freeman claiming they found two knives as well as drug paraphernalia and a metal bar that could be used as a weapon.

When Freeman finally looked into his truck, he found the interior had been damaged and a host of new car batteries – that weren't his – were sitting there.

"The whole tumbler in my vehicle was destroyed," he said. "He had 14 brand new batteries, he was going around stealing people's batteries with my truck."

He estimates the man caused roughly $1,500 worth of damage.

Kamloops RCMP confirm a man was arrested in connection to a stolen truck, and that Freeman was found holding the man down when officers arrived.

The suspect - who has not been identified - will face charges, says Cpl. Jodi Shelkie.

But how the scenario unfolded is something RCMP does not recommend.

"It doesn’t matter your fitness level or your level of skill, if somebody has a weapon then it can be very dangerous," she said.

Looking beyond the damage, Freeman says what really frustrated him is how quickly the suspect was released from custody.

"I was just floored," he said. "What I'm pissed off about is this guy got out literally four hours later."

"It's unfortunate because these guys just keep doing it. It's a huge issue in Kamloops."

But the suspect made one big mistake, according to Freeman.

"I'm a pro-fighter. I'm a former king of the cage lightweight champion. I've got two MMA titles, I'm a jiu-jitsu black belt, I own my own martial arts studio here, so he broke into the wrong truck."