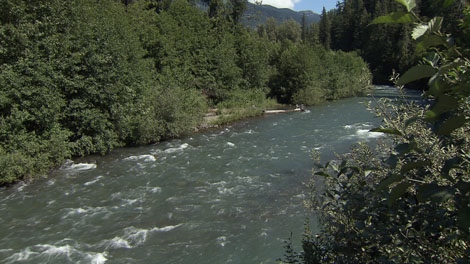 Cheakamus River is seen in this file photo.

VANCOUVER -- RCMP are looking for a kayaker they say went missing near Whistler Sunday evening.

He was kayaking with friends and they, along with Whistler RCMP, Whistler Search Rescue and the Whistler Fire Rescue Swift Water Team all began to search for him immediately. By 9:30 p.m., the search was called off for the night as it was getting dark.

The next morning, a helicopter was called in and the man's kayak was found several kilometres downstream trapped in a log jam.

"The river in the search area is currently running very high and fast which has made searching difficult and extremely dangerous for searches both on the water and at the shoreline," Whistler Mounties said in a news release.

"With the current run off and rain forecasted in the area it is expected that the river will be running high and fast for some time."

No details were given about the missing man.