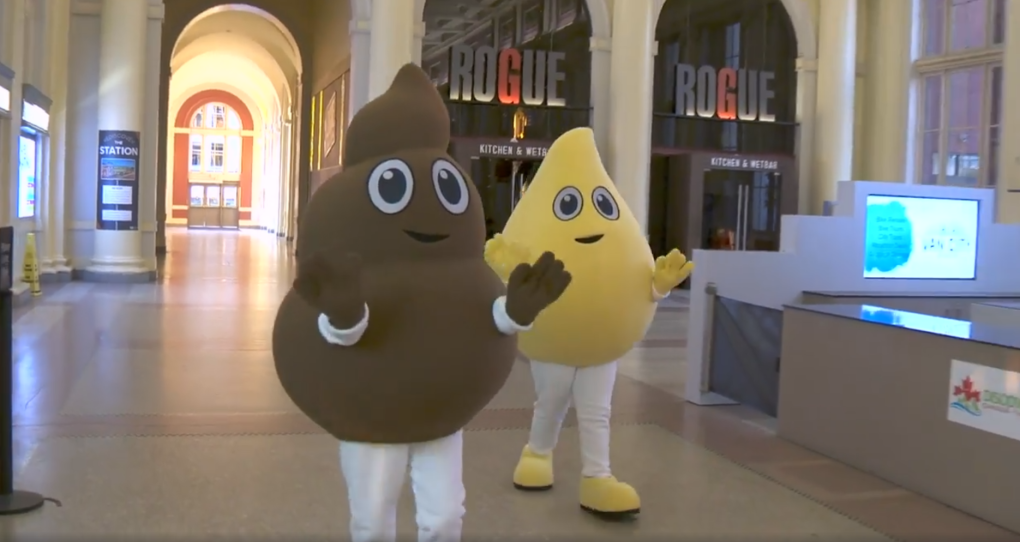 The two new bodily function-themed mascots are part of the region's "Unflushables" campaign, geared at raising awareness about what should and shouldn't be flushed down the toilet.

The two mascots, one dressed as a giant turd and the other as a droplet of pee, made an appearance in Waterfront Station on Monday for the campaign launch.

"Our sewage system does not get enough respect," said Coquitlam Mayor Richard Stewart, in a promotional video. "We really have to, as consumers, understand that what gets flushed doesn't disappear… we only want people to flush the pee and the poo."

The mascots name and design has been roundly mocked on social media.

Someone should have flushed this idea.

Metro Vancouver's campaign is aimed at highlighting that only bodily waste and toilet paper should be flushed down the toilet.

It's a campaign about what not to flush," said Larina Lopez, director of corporate communications, in the video. "We focus on seven items, namely wipes. That's the most confusing one for people. That one has 'flushable' actually on the product."

In the promotional video, Lopez emphasizes that even items that say they are flushable – such as tampons and wipes – should not be flushed down the toilet.

"We focus on seven items, namely wipes. That's the most confusing one for people. That one has 'flushable' actually on the product," she said.

Metro Vancouver has launched a similar campaign before, but not with the giant mascots that appeared in Waterfront Station.