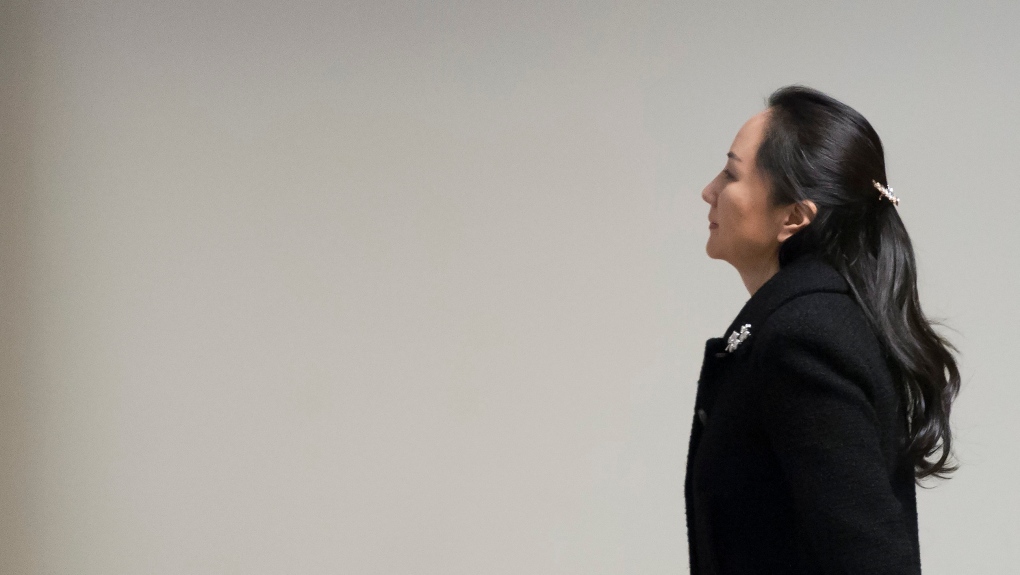 VANCOUVER -- Lawyers for Meng Wanzhou are alleging that Canada's national spy agency was in on a plan for border officers to detain the Huawei executive for hours before her arrest at Vancouver's airport and was mindful of the political implications of her arrest.

Meng is wanted on fraud charges in the United States, but she and Huawei have both denied the allegations and say the extradition case should be thrown out.

They argue Meng's charter rights were violated when she was held and questioned by border officials who seized her electronics and passwords and shared them with RCMP before she was notified of her arrest on Dec. 1, 2018.

In a document filed with the Federal Court, Meng's lawyers say a two-page redacted report shows the Canadian Security Intelligence Service was aware of a planned multi-hour delay because the report says her arrest was expected to occur at about 4 p.m. even though her plane landed at 11:30 a.m.

The CSIS report says the RCMP “with likely CBSA assistance” would make the arrest, and Meng's lawyers argue this is evidence of collusion because it's not part of the border service's mandate to assist the RCMP in gathering evidence.

CSIS did not immediately respond to a request for comment.

“CSIS's knowledge that Ms. Meng's arrest would not be effected until 'approximately 16:00 Vancouver time' is troubling, since it is consistent with CSIS knowing that the CBSA would first detain, search and interrogate Ms. Meng upon her arrival at YVR at 11:30 a.m., and that there would therefore be a multi-hour delay before Ms. Meng's eventual arrest by RCMP,” the defence says in the document.

Meng's lawyers also argue that CSIS was conscious of obscuring the involvement of the FBI and mindful of the politically sensitive timing of her arrest.

“The author of the CSIS report also was aware that the arrest of Ms. Meng would be a high-profile political event, saying 'the arrest is likely to send shockwaves around the world ....” The CSIS report was also preoccupied with when the news of Ms. Meng's arrest might become public and states that the timing of the arrest 'may delay Chinese recognition of the event,'“ the defence document says.

“This is a point of particular interest given that Canadian Prime Minister Justin Trudeau, U.S. President Donald Trump and the President of the Peoples Republic of China, Ji Jinping, were simultaneously attending the G20 summit in Buenos Aires, Argentina, and dining together on the evening of Dec. 1, 2020,” it says.

The CSIS Report does not mention the gathering of world leaders.

The CSIS report “makes plain” that not only was CSIS involved in communicating with the FBI and others regarding the planning of Meng's arrest but was conscious of obscuring the FBI's involvement, the defence team alleges.

“The FBI will not be present in an effort to avoid the perception of influence,” the CSIS report says.

Extradition hearings are ongoing in the B.C. Supreme Court after Associate Chief Justice Heather Holmes rejected the first set of arguments from Meng's lawyers that the allegations against her wouldn't be considered crimes in Canada.

The defence says in the that the attorney general of Canada should release the full CSIS file from which the report flowed.

The document is an application for the court to appoint a friend of the court to participate in the ex parte, in camera portion of proceedings regarding the disclosure of further information that may be deemed confidential.

Holmes granted Meng's disclosure motion on Dec. 9 on the basis that the defence had established an “air of reality” to its allegations of abuse of process.

In response, the attorney general released about 1,200 pages of additional material on Feb. 28. Many of the documents were redacted and 162 documents were wholly withheld based on privilege claims.

The two-page CSIS report was disclosed after the attorney general determined it was also relevant, but it was redacted based on a claim of national security privilege.

In a June 10 court order, Justice Catherine Kane appointed lawyer Anil Kapoor to act as the friend of the court.

Kapoor will have access to further confidential information the defence team is seeking but cannot share the contents with Meng and her team.

Kapoor is allowed to communicate with Meng and her team before seeing the documents but not after, although her lawyers can send one-way messages to him.

This report by The Canadian Press was first published June 12, 2020.