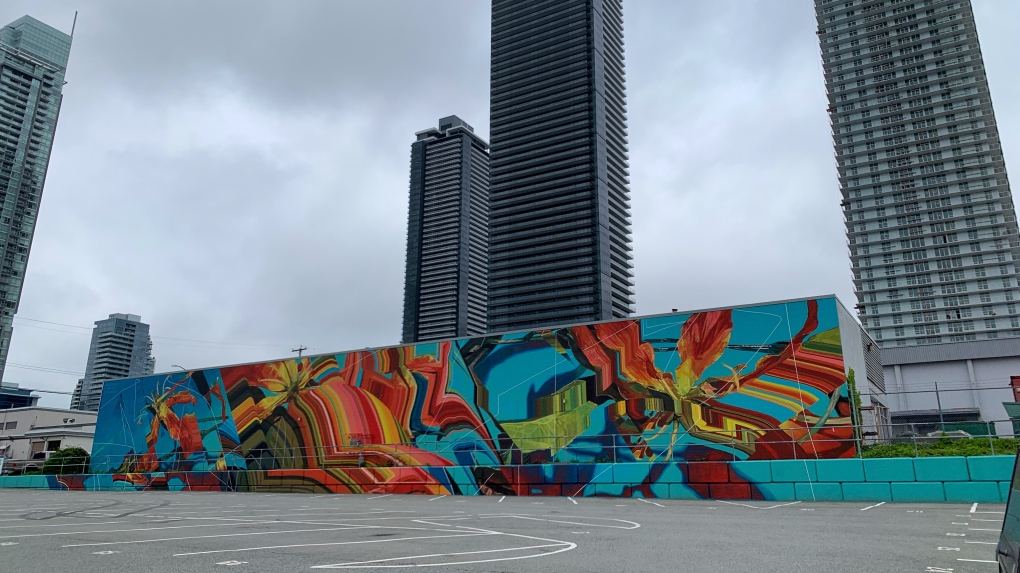 One of Metro Vancouver's newest and largest pieces of public art made its debut Friday. (CTV)

VANCOUVER -- One of Metro Vancouver's newest and largest pieces of public art made its debut Friday.

The mural in Burnaby's Brentwood neighbourhood is 49 metres long and six metres tall, and it took three weeks and more than 600 total hours of work to complete, according to artist Drew Young.

The title of the piece is "Pursuit of Chance," and the Victoria-born, Vancouver-based artist says it seeks to blend styles and bring colour and vibrancy to the under-construction neighbourhood.

“The mural has a unique aesthetic, striking a balance between photo-realism and digital abstraction on a huge scale," Young said in a news release announcing the mural's completion. "It’s got one foot in the past and one in the future.”

Young serves as curator and artistic director for the Vancouver Mural Festival, as well as visual arts director for Skookum Festival. He has contributed to hundreds of public art projects around Metro Vancouver.

Pursuit of Chance is located on the site of a planned development by Grosvenor Americas. The developer has not released specific plans for what will be built on the roughly eight-acre site, but says the development will include condominiums, market and non-market rental housing, and retail space.

The developer commissioned the mural.

Those interested in seeing the new mural in person can visit it at 2150 Alpha Ave., near the intersection of Alpha Avenue and Dawson Street, in Burnaby.