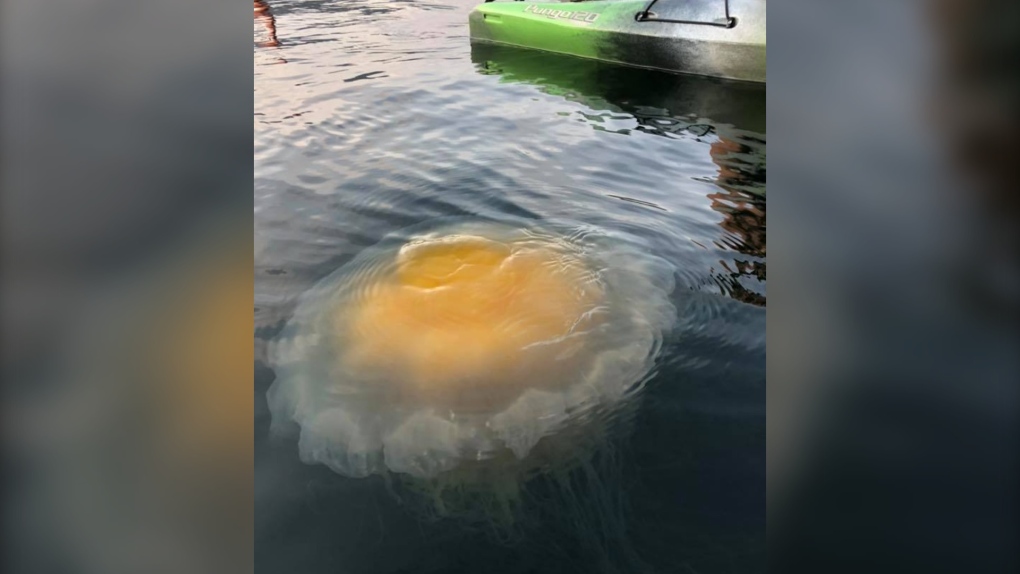 An egg yolk jellyfish is seen in this image posted to Twitter by Ocean Wise.

What looks like a fried egg, lives in the ocean and grows up to six metres long?

An image posted to Twitter by Ocean Wise shows a particularly impressive example off the egg yolk or fried egg jellyfish spotted off the Sunshine Coast.

"These jellies can grow tentacles up to 20 feet long," the organization said in a caption accompanying the photo, which was shot by Donna Harrison.

With a bright, yellow centre and a white, translucent perimeter, the jelly looks like an egg that's been cracked into water—hence its name.

According to California's Aquarium of the Pacific, egg yolk jellyfish live in temperate, open water in the Eastern Pacific Ocean from the Gulf of Alaska to Chile.

They grow to some two feet in diameter and are considered a carnivorous predator, feeding primarily on smaller types of jellies.

Stings from fried egg jellyfish can cause skin irritation, but the species is considered relatively harmless to humans.

Incredible! This massive egg-yolk (or fried egg) jelly was spotted off the Sunshine Coast in British Columbia. #DYK? These jellies can grow tentacles up to 20ft long.
Photo: Donna Harrison pic.twitter.com/c6HRbQAaR7