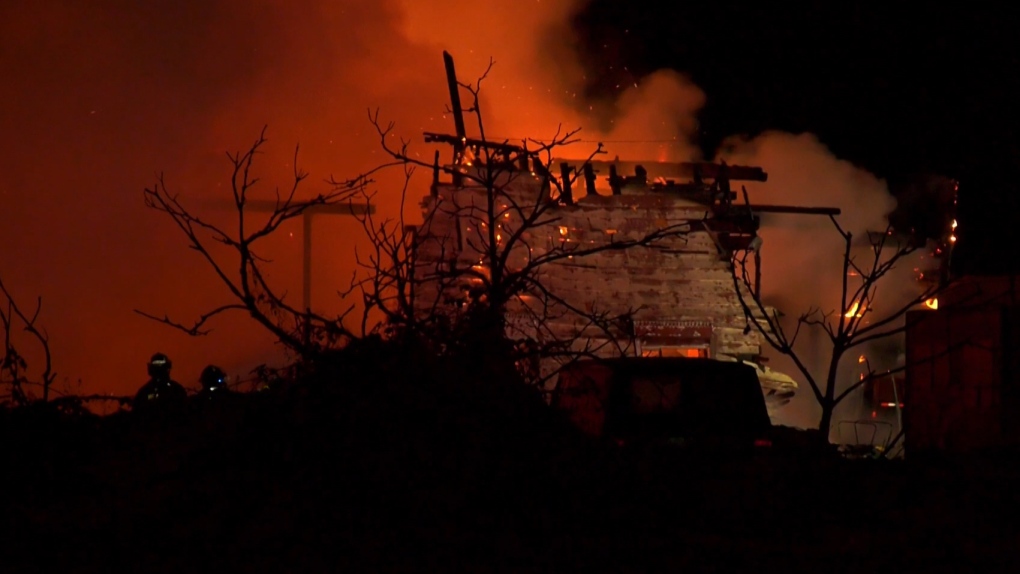 Multiple people called 911 just before 4 a.m. Friday after a building on a large property on Lougheed Highway near Old Dewdney Trunk Road went up in flames.

“It appears that it’s a workshop building in the back. There were a few trailers connected to it, “ said Chief Mike Larsson of Pitt Meadows Fire and Rescue Services.

The entire structure was on fire when crews arrived, sending flames shooting 60 feet into the air.

Heavy smoke and embers filled the night sky and could be seen from several kilometres away.

“It had a lot of material inside it from it being a workshop that got the fire going,” Larsson told CTV News.

“They had acetylene, they had oxygen, they had a few propane bottles inside that were going off.”

The chief says it’s too early to say what may have ignited the blaze, but it’s not believed to be suspicious.

The property also has a house and several trailers, all residents were able to escape unharmed.

Crews were also able to contain the damage to the workshop.

The residents have been displaced until hydro can be restored and are being assisted by Emergency Support Services.

First responders blocked part of Lougheed Highway for several hours as a team of more than 20 firefighters worked to fight the flames.

Access was their biggest challenge, as the building was at the back of the property and a ways down the highway from a hydrant.

“The water line is about 1,000 metres down the highway. So we’ve crossed over three different driveways getting in here. We had to relay it to a second truck to make sure we had enough water pressure to get to the fire,” explained Larsson.