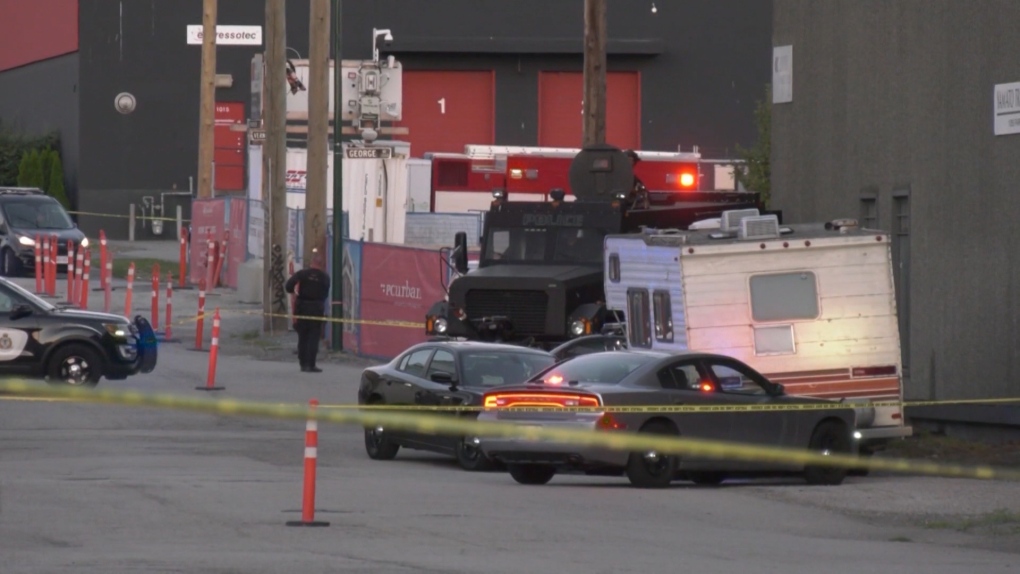 A man was taken into custody in East Vancouver after a tense standoff at an RV on Aug. 27, 2020.

VANCOUVER -- A man was taken into custody in Vancouver early Thursday morning after a tense, overnight standoff involving the Emergency Response Team came to an end.

Vancouver police say they were called to Parker and George streets, just a block away from the controversial Strathcona Park tent city, around 6:30 p.m. for reports of a domestic dispute involving yelling but no physical assault.

Police say when they arrived, a man refused to exit a motorhome that was parked beside a commercial building, resulting in a standoff that lasted for hours.

Police used a loud speaker to try to communicate with a man inside but he did not appear to respond at the start.

At one point, officers set off a flash bang device right next to the RV but even that did not appear to garner a response from the person inside.

The ERT was called in to assist and police could later be heard on a loudspeaker telling a man named “Michael” to exit the R.V.

Police set up a large perimeter around the motorhome, keeping the public back as they spent hours negotiating with the man inside.

Vancouver police say once the man in the motorhome was identified, they learned he was wanted on an immigration warrant as well as a warrant for uttering threats.

He was taken into custody and arrested on the two warrants around 1:30 a.m. Thursday. It’s unclear how that arrest was made and if the man came out willingly.

Police have not identified the suspect, who has been taken to hospital for assessment under the mental health act.

The second person involved in the domestic dispute was not injured.

It’s unclear if the man who was arrested, or the motorhome he was in, have any ties to the nearby tent city in Strathcona Park.

An area of Raymur Street near the park has been a popular spot for people living in R.V.s for years.

Neighbours have been voicing safety concerns about what they believe to be growing issues in their neighbourhood since the tent city sprang up earlier this year.

It’s estimated there are about 300 people living in the park.