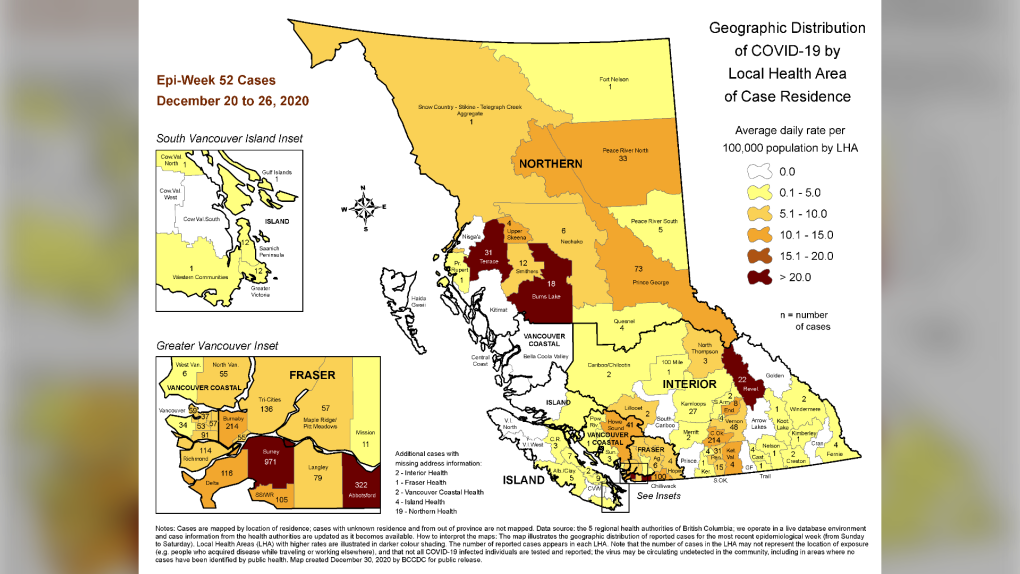 VANCOUVER -- The latest geographic breakdown of COVID-19 infection data from the B.C. Centre for Disease Control shows the number of new cases of the disease decreasing in comparison to previous weeks.

That said, hotspots with large numbers of per-capita cases can still be found in parts of the Lower Mainland, the Interior and the province's north.

As has been the case for most of the pandemic, the local health area that covers most of the City of Surrey is the region that recorded the largest number of cases in the last week.

A total of 971 cases - more than 20 per 100,000 residents per day - were recorded in the area during the week in question. No other local health area recorded more than 350 cases, overall.

It's worth noting, however, that the latest map shows a significant decrease in the number of new cases being detected in Surrey. During the previous week - Dec. 13 to 19 - the local health area recorded more than 1,300 new cases of COVID-19.

Though trending in the right direction, Surrey's weekly caseload still puts it over 20 daily cases per 100,000 residents, the highest level shown on the BCCDC map.

Joining Surrey in this category for the week that ended on Dec. 26 is the City of Abbotsford, which recorded 322 new cases, overall.

No other region of the Lower Mainland recorded even 15 new infections per 100,000 residents, with the Burnaby, Delta and South Surrey/White Rock local health areas coming closest at between 10 and 15 cases per 100,000.

Elsewhere in the province, there are several local health areas that match Surrey and Abbotsford for new cases per capita, though these regions have smaller overall caseloads because they have much smaller populations.

In Interior Health, the Revelstoke local health area recorded 22 new cases between Dec. 20 and 26, a total that equates to more than 20 infections per 100,000 residents per day.

Similarly, the Northern Health local health areas of Terrace and Burns Lake recorded totals that put them in the highest per capita category, with 31 and 18 new cases, respectively, detected during the week in question.

Vancouver Island remains the part of the province with the lowest rate of COVID-19 transmission. No local health area in the Island Health region recorded more than five cases per 100,000 residents between Dec. 20 and 26.

The full-size version of the most recent case map can be found on the BCCDC website.