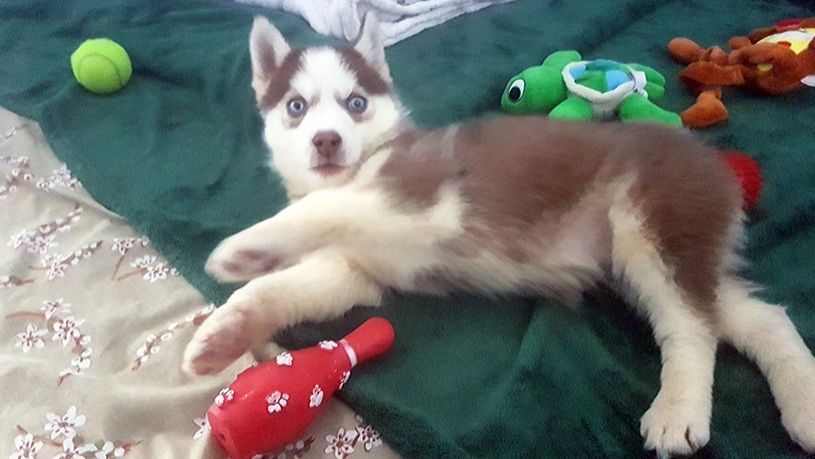 Uki, the smallest of 17 husky puppies up for adoption in January 2019, has found a new home. (SPCA photo)

VANCOUVER -- The last – and smallest – of 17 husky puppies has been adopted in B.C.'s South Okanagan.

The puppies were rescued from the province's Interior on Christmas Eve and were ready for adoption earlier this month.

The smallest, named Uki, which is Inuktitut for "survivor," was the last to be adopted as he needed some extra medical care. But the SPCA captured Uki's adoption on camera, which was a surprise for the eldest son in the family.

"He's so cute," the son says in the video, unaware that Uki was about to become the newest member of the family.

"Well, do you want to keep him," someone asks off-screen.

"Yeah," the boy nods, with his younger brother holding a squirming Uki.

"This is the biggest surprise of your life, dude," a woman who appears to be the boys' mother says.

The little huskies were extremely popular as over 1,200 adoption applications poured in for the 17 pups. They all found homes in the Okanagan, Lower Mainland, Vancouver Island, northern B.C. and Banff. All 17 were given northern-themed names.

"Thank you to everyone who followed the story of these puppies," the BC SPCA said on its website. "With your support, all of them received the daily care they needed until they were ready to find their forever homes."