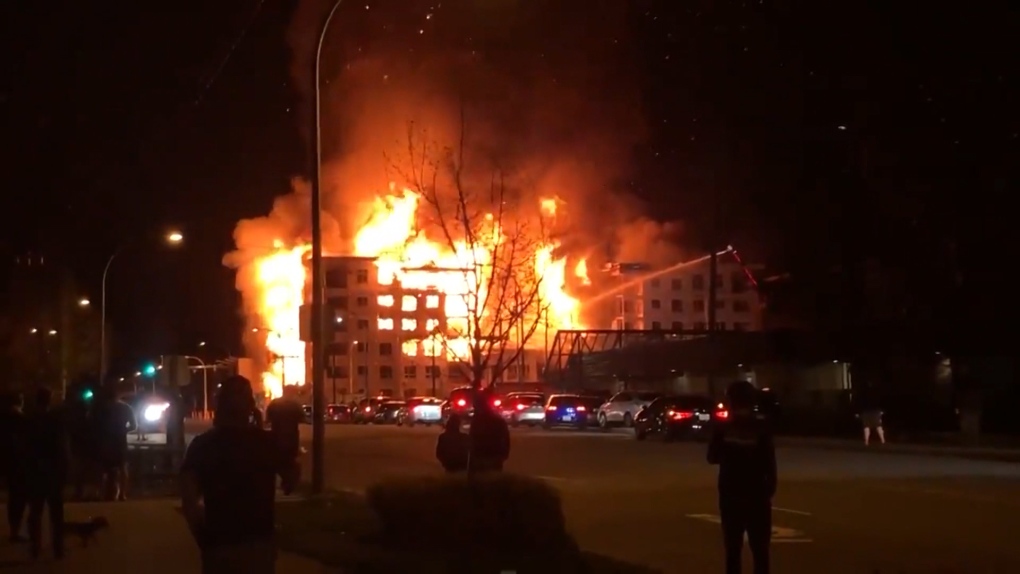 A large fire at a construction site in Langley on April 19, 2021, forced dozens of nearby residents to evacuate their homes in case the flames spread.

LANGLEY, B.C. -- An investigation continues into what caused a massive fire at a condo development in Langley Monday.

The explosive fire all but leveled the four-building pre-sale condo development that had been nearing completion.

There is no indication that the fire is suspicious, but Langley Township’s deputy fire chief, Bruce Ferguson, says an in-depth investigation is underway. That investigation includes other agencies and private fire investigators.

Ferguson says it appears the blaze began somewhere in the centre of the complex which was under construction.

The fire forced more than 100 people living nearby from their homes, but residents in all but two units have been allowed to return.

The flames broke out Monday about 9:30 p.m near 80th Avenue and 208th Street. The fire sent embers flying, where they started another fire a block away, heat from the flames melted the siding on a neighbouring home.

When crews arrived two of the towers were already on fire, but it quickly spread through the wood frame buildings.

Metro-Can Construction, which is the contractor for the site, said all four buildings at the Alexander Square Development, which were unoccupied and at various stages of construction, were affected.

By Tuesday, all that was left standing were two elevator shafts and the remnants of one of the buildings on the south side of the development.

A deputy fire chief described the blaze as "one of those fires you rarely see in your career."

"So it's a very big event," Andy Hewitson said.

Michelle Molnar, who lives across the street from the development, said the siding and windows on her townhouse melted due to the intense heat.

"We're so lucky this is all the damage we have," she said. "If the wind had started blowing the other way it would have been a different story."

The fire department is asking anyone with video of the fire or dash cam or security camera footage from the area between about 8 p.m. and 10:30 p.m Monday to contact them to assist in the investigation.

A development website lists the project as being sold-out. It’s unclear what may happen next for buyers and the fire department says there is no chance of saving any part of the development.

“It’s a pile of rubble and hole in the ground right now,” Ferguson said.