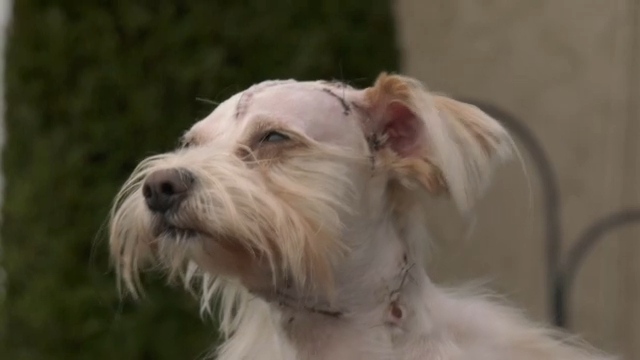 Kerry van Aswegen’s three year-old dog Lucy is still recovering after being grabbed by a cougar in the yard of their Coquitlam home last week.

VANCOUVER -- Kerry van Aswegen’s three year-old dog Lucy is still recovering after being grabbed by a cougar in the yard of their Coquitlam home last week.

“She had brain surgery on Thursday,” van Aswegen said, adding their beloved pet is eating and “doing well”, but is still in serious condition. “I’m hopeful. We’re very hopeful.”

The slender Havanese was attacked last Tuesday evening, when van Aswegen’s husband took the dogs out in the yard to go to the bathroom before bed. She said the cougar was “not two feet” away from her husband when it jumped up and grabbed Lucy as the dogs were heading back inside.

“My husband, pure adrenalin talking, chased after him,” she said. “He found the cougar holding Lucy about three houses down in the backyard.”

Van Aswegen said the cougar only let Lucy go when her husband approached the animal holding a stick.

“My biggest concern is you can’t walk in the street and feel safe,” she said, and added taking the dogs out now has become “quite the ordeal,” with the couple standing guard and turning extra lights on. “It’s a horrible feeling... you cannot go out in your backyard without feeling afraid.”

Just days after the attack on Lucy, another local pet was grabbed by a cougar and did not survive the encounter. The cougar jumped a fence into a yard where the pug puppy was with its owner.

On Monday, acting Sgt. Alicia Stark with the Conservation Officer Service confirmed a man walking his dog in a park was approached by a cougar that same day, and they believe it was the same animal that took the puppy.

A live trap was set up Sunday in a local yard, and on Tuesday, the environment ministry said hounds are now being brought in to try and track the cougars down.

“These enhanced resources are in response to repeated cougar behaviour that appears to be growing bolder around people,” the ministry said in an email. “While cougars targeting small dogs as prey is not unusual, this bold behaviour towards people with dogs is escalating.”

People are being advised to keep pets on leashes or indoors, and report sightings as soon as possible.

Sgt. Stark said Monday there would be more options to target the cougars if they were in a rural area.

“We could be setting foothold traps, and things like that, but that’s just not safe in a city,” she said. “We’re doing the best that we can at this moment to try to catch up to them, but I understand how the fear can be there.”

While conservation has said they normally have more cougar-related reports at this time of year, this year the cougar activity has increased, though they’re not sure of the reason.

Home security video shared by a local resident showed two cougars passing a townhouse on Sunday night at around 7:30 p.m.. In the video, the first animal walks up the path towards the entrance of the home and then pauses, and then a second cougar is seen emerging and they both leave.

Van Aswegen said this is the first time she’s seen a cougar in 15 years of living in the area.

“If they (conservation) don’t know what to do to deter them from coming into the city, then they need to go outside, internationally, and find out,” she said.

She said there are still no warning signs posted around where she lives, and she wanted to tell others to take safety precautions.

If you encounter a cougar, make yourself look large and threatening, and make loud noises. Never turn your back or run. If a cougar attacks, the advice is to fight back.