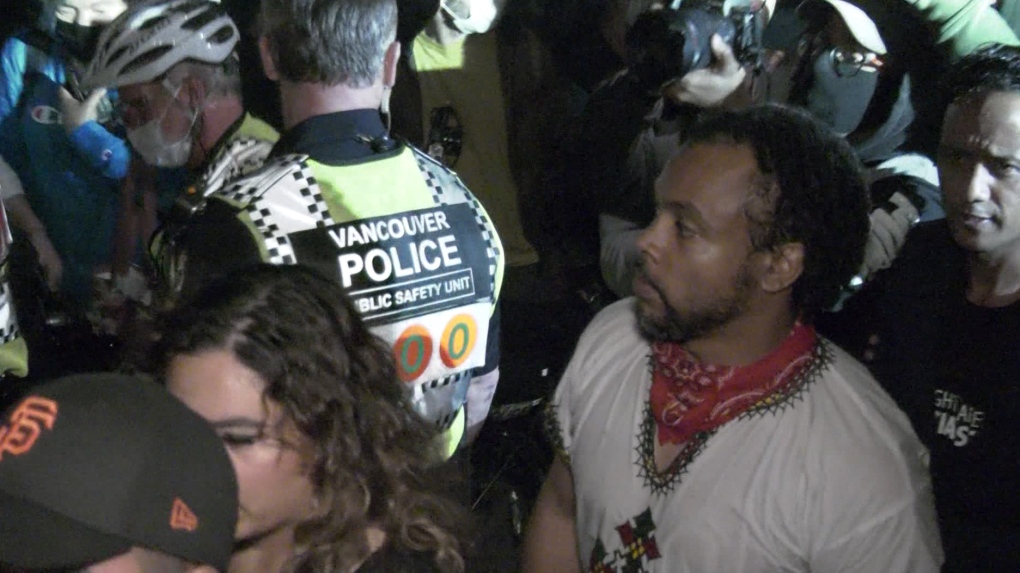 Controversial street preacher David Lynn is escorted by the Vancouver Police Department during a protest against his cross-country tour. (CTV News Vancouver)

VANCOUVER -- The sandy shores of Vancouver's Sunset Beach were packed Monday night, as hundreds of people came to protest a controversial preacher and his supporters.

David Lynn, a Toronto-based Christian street preacher who has been accused of spouting anti-gay rhetoric and provoking fights in that city's Church Street district, arrived in Vancouver this weekend as part of a cross-country mission.

Yesterday, he began by preaching in Surrey and Gastown, before a Vancouver Police Department escort led him down the hill from Beach Avenue to the chilly water, where he started baptismal services.

The counter-protest was planned as a dance party, with people carrying speakers, amplifiers, horns and musical instruments to drown out Lynn's sermons.

"We're here today to hold space for queer people who might feel that they're not included or are offended by the hate speech that's been allowed to happen in Vancouver and Victoria," said protest organizer Matt Troy.

The preacher's mission has been cast into the spotlight on the West Coast recently.

Vancouver police have recommended charges against both Love and the other man involved. Those charges are pending.

Protesters at Sunset Beach called Morissette a hero for defending the city's gay community from the homophobic messages, adding they would do the same.

"We're here to stand against that hate speech and let everyone know that Vancouver is an open and loving community," finished Troy.

Two younger people who attended the protest say they were pepper sprayed by Vancouver police as Lynn was leaving the beach.

The VPD confirmed to CTV News Vancouver one person was arrested for spitting on someone else, and assault charges have been recommended.

A Vancouver police officer tweeted Tuesday morning that he was assaulted while trying to escort a protester into a taxi.

Injured my hand and now recovering at home after a large dynamic protest at Sunset Beach last night.

While using my bike as a barricade, several protesters tried to steal it and a tug of war ensued.

Proud of how my #VPD brothers and sisters stepped in to help. #BikeCops

Love appeared in a YouTube livestream last week, apparently reaching out to Lynn for help.

When asked last week about the connection between Lynn's organization, Christ's Forgiveness Ministries, and Dorre Love, the organization emailed a statement to CTV News Vancouver.

Lynn is now expected to leave Vancouver and head to Jasper, Alta. next.