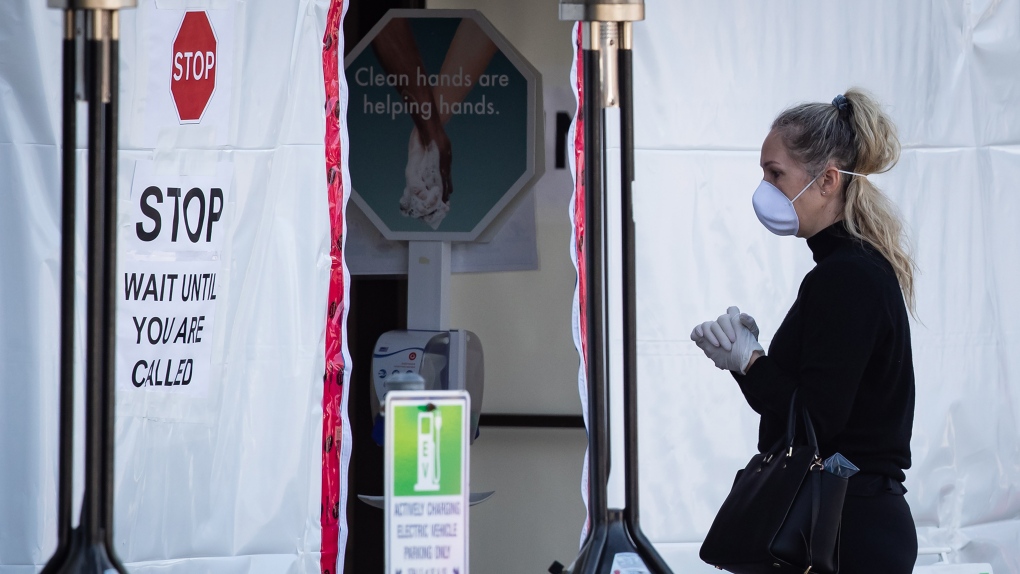 A woman wearing a protective face mask and gloves waits at a COVID-19 assessment centre for staff at Lions Gate Hospital, in North Vancouver, on Thursday, March 19, 2020. THE CANADIAN PRESS/Darryl Dyck

VICTORIA, B.C. -- Scientists who track the growth of pandemics say some figures provided by public health officials tell more about the spread of the novel coronavirus than others.

Daniel Coombs says the number of people admitted to hospitals tells him where COVID-19 stands in a community, a province or across the entire country.

The mathematics professor at the University of British Columbia's institute of applied mathematics said those numbers best indicate the daily status of COVID-19.

The number of new positive tests and reports of how many people have recovered are less important, said Coombs, who has also conducted research on overdose prevention efforts during B.C.'s ongoing illicit opioid overdose epidemic.

He said those in hospital are a definitive count of patients who have contracted COVID-19, adding that the numbers associated with testing are not as firm because there are more variables involved.

Prof. Junling Ma of the University of Victoria's department of mathematics and statistics said providing the recovery rate figures would likely be viewed by the public as comforting, but scientists are looking at different data.

Ma, who studies the spread of infectious diseases in populations, said the daily toll of new cases provide information, but it's dated.

“The numbers right now are not quite related to today's new cases,” said Ma, adding the daily case updates are from people who were infected two weeks ago.

Ma and Coombs said the figure for people listed as being infected with COVID-19 isn't as helpful as some other numbers because not everybody is being tested. But hospitalization data provides actual head counts, they said.

In recent days, those receiving hospital care in B.C. has not spiked, indicating the province's self-isolation and physical distancing measures may be slowing the spread of COVID-19, Coombs said.

“What we're afraid of is seeing exponential growth of anything related to the disease in the province,” he said. “I feel like the hospitalization and ICU number is very important information and may be overlooked by everybody focusing on the number of new cases.”

Dr. Bonnie Henry, British Columbia's provincial health officer, credited good fortune and lessons learned from other provinces for early restrictive measures that appear to have helped slow the spread of COVID-19 in the community.

B.C. learned from Quebec and Ontario, where spring break began two weeks earlier and travellers unknowingly brought back the disease with them, she said.

This report by The Canadian Press was first published April 7, 2020.