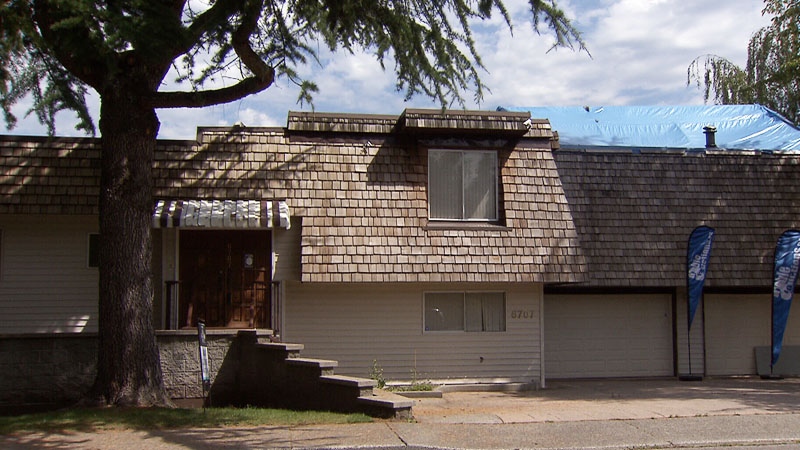 A Burnaby tear-down was not sold at a minutes-long auction, where the highest bidder offered a price nearly $200,000 under the asking price.

The home, which was listed just under $1.7 million, will be sold through a multiple listing service (MLS) after bidders were unwilling to meet the reserve.

The front-lawn auction began at noon and the final bid was placed shortly before 12:20 p.m. The highest bid, $1.5 million, was nearly $200,000 less than the owner had hoped to bring in, so auctioneers placed a call to see if the seller was willing to settle.

The owner did not accept the offer, so the home will be posted on MLS and sold traditionally.

Only a handful of bidders showed up in person, but Able Auctions said another 20 to 30 people placed bids online.

Bidding began at $2.5 million, but when no one was interested, the auctioneer was forced to drop the price.

"It looked like all we had were bargain hunters who were trying to steal the property, and that wasn't going to happen," realtor Greg Klemke said.

He said he was baffled by the lack of buyers, and that the auctioneers had been so sure that the event would be a success that they didn't charge the homeowner any fees for it.

Still, the real estate agent said the failed auction was an "incredible process," and served as a learning experience for the entire industry.

It also brought the owner an unusual amount of advertising through media coverage across the Metro Vancouver area, and drew eyes of builders who may not have seen it otherwise.

"I don't think anyone in Greater Vancouver didn't know this was happening, if they were savvy to real estate," Klemke said.

The auction brought a crowd of curious onlookers to the home at 6707 Burford St., a tear-down on a corner lot in a quiet neighbourhood. Located in the Upper Deer Lake area of the city, the property's value is mostly in its land, with a realtor describing the building as "unlivable."

The realtor working with the owner expected it to be purchased by a builder, who would demolish the house and rebuild on the 50-ft.-by-149-ft. lot.

Though the home itself is not much to look at, its method of sale brought spectators to the auction that is one of the first of its kind in Metro Vancouver.

Klemke added that he believes the process of auctions scared buyers away, since it is unfamiliar to most builders in the area.

He also said the publicity and audience may have been "overwhelming" to buyers used to remaining anonymous.

Auctions are a common practice in Australia and the U.K., favoured by homeowners because they allow the seller to dictate the terms and conditions of the sale, with a closing date of 10 days.

Sellers also pay lower real estate commissions, and can get a higher price for their home if bidders are drawn into the competition.

Bidding wars are not uncommon in a housing market like Vancouver's, but the biggest difference with this sale is the transparency. In this case, potential buyers will know exactly what bidders are offering.

Bids come up short for $1.7M 'unlivable' home in Burnaby