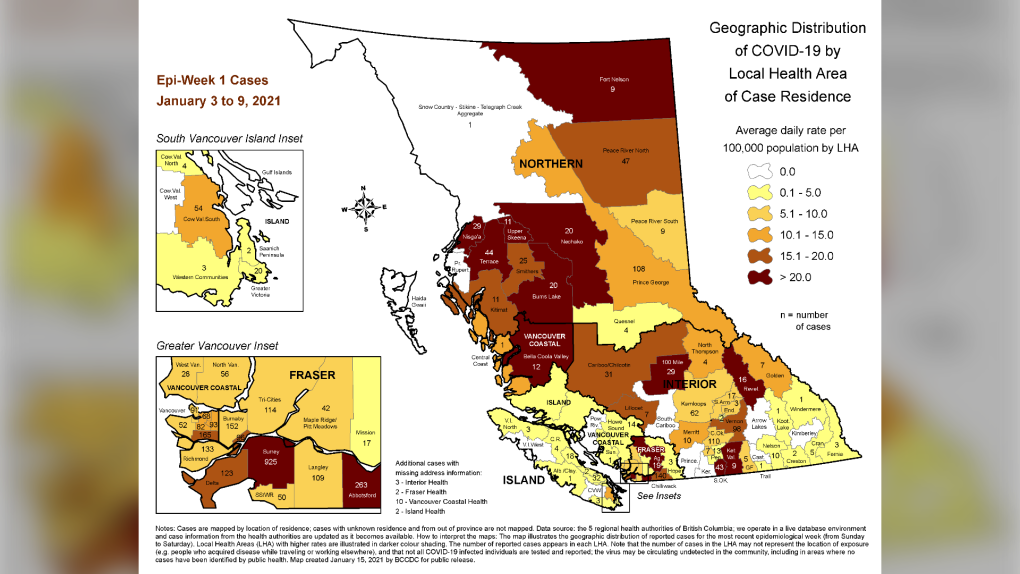 The B.C. Centre for Disease Control's latest map of COVID-19 case data shows hotspots in the province's Interior and north, as well as a growing density of cases in the Vancouver Island region where a First Nation has been struggling with an outbreak. (BCCDC)

VANCOUVER -- The B.C. Centre for Disease Control's latest map of COVID-19 case data shows hotspots in the province's Interior and north, as well as a growing density of cases in the Vancouver Island region where a First Nation has been struggling with an outbreak.

While the BCCDC usually releases new maps showing coronavirus infections by "local health area" on Thursdays, the centre's website indicated that this week's would be delayed because of "incomplete data."

The latest map, showing COVID-19 cases confirmed from Jan. 3 through 9, was released on Saturday.

As usual, the local health area with the largest number of new cases recorded was the one that includes the majority of the City of Surrey. A total of 925 cases were detected there during the week in question, a slight increase from the 901 detected during the previous week.

That said, on a per-capita basis, numerous regions of the province are recording caseloads similar to those seen in Surrey.

From Jan. 3 to 9, the local health area that makes up the City of Abbotsford recorded 263 total cases of COVID-19, a number that equates to more than 20 cases per 100,000 residents each day, the same rate seen in Surrey.

Every health authority in the province, except Island Health, has at least one local health area seeing this high a volume of cases.

In Fraser Health, in addition to Surrey and Abbotsford, the Agassiz local health area recorded more than 20 cases per 100,000 residents per day during the week in question, despite confirming just 19 infections overall.

Likewise, the Vancouver Coastal Health region known as the Bella Coola Valley saw just 12 total cases, but is still shaded the darkest shade of red on the map, indicating a per-capita caseload comparable to Surrey's.

In Interior Health, four local health areas recorded more than 20 cases per 100,000 residents during the week of Jan. 3. The areas in question are South Okanagan, 100 Mile, Revelstoke and Kettle Valley, which recorded totals of 43, 29, 16 and nine cases, respectively.

Though Island Health does not have any local health areas with more than 20 COVID-19 infections per 100,000 residents per day, there is one region in the health authority where per-capita cases are notably higher than the surrounding area.

That region is Cowichan Valley South, which includes the City of Duncan and the Cowichan Tribes First Nation, which has been experiencing a COVID-19 outbreak in recent weeks.

Between Jan. 3 and Jan. 9, 54 people in the Cowichan Valley South region tested positive for COVID-19, according to the map. That total equates to between 10 and 15 cases per 100,000 residents of the region per day.

The latest map of COVID-19 cases can be found on the BCCDC website.