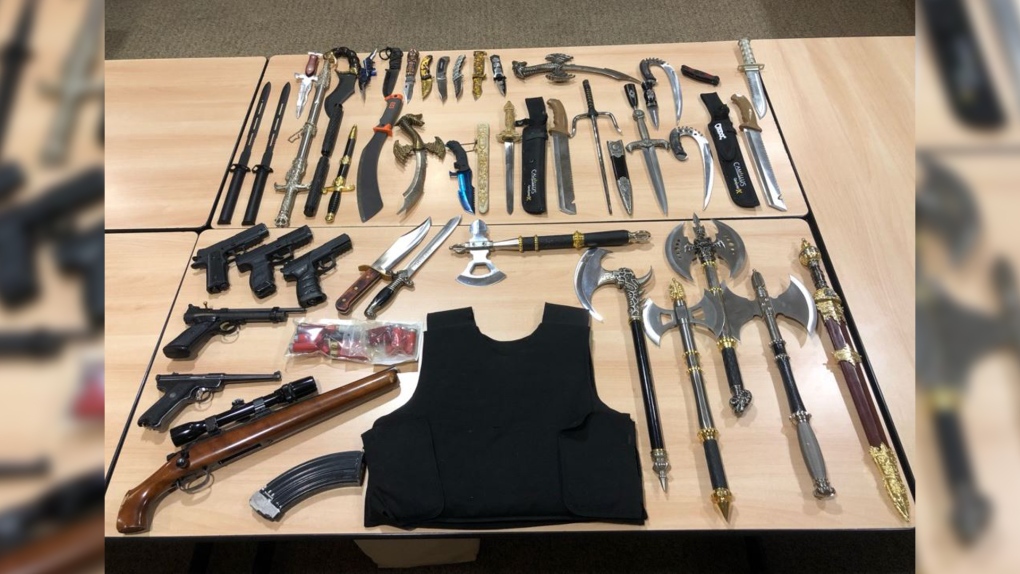 Weapons seized by the Surrey RCMP during a fraud investigation are seen in this provided image.

Mounties in Surrey say they have seized four high-end vehicles and a cache of weapons while investigating complaints of alleged vehicle fraud.

Starting last year, investigators say they began to suspect the identities of some Lower Mainland residents were being "stolen or compromised for the purpose of purchasing, registering and re-selling high-end vehicles."

The vehicles, all of which were allegedly obtained through fraudulent means, are worth an estimated total of $225,000.

On Jan. 18, officers executed a search warrant at a property connected to the investigation in the 8300 block of 135A Street.

Investigators seized an array of weapons from the scene, including two handguns, three imitation handguns, various ammunition, body armour, knives, daggers and machetes, as well as a collection of medieval-style axes and swords. They also found allegedly stolen documents and mail.

Officers also detained seven people who were inside the residence, but they have since been let go. No charges have been laid.

“Individuals associated with identity theft and fraud will stop at nothing to get what they want including expensive vehicles,” Insp. Wendy Mehat said in a statement.

“Victims of these crimes can experience financial loss and difficulty obtaining credit or restoring their 'good name.'"