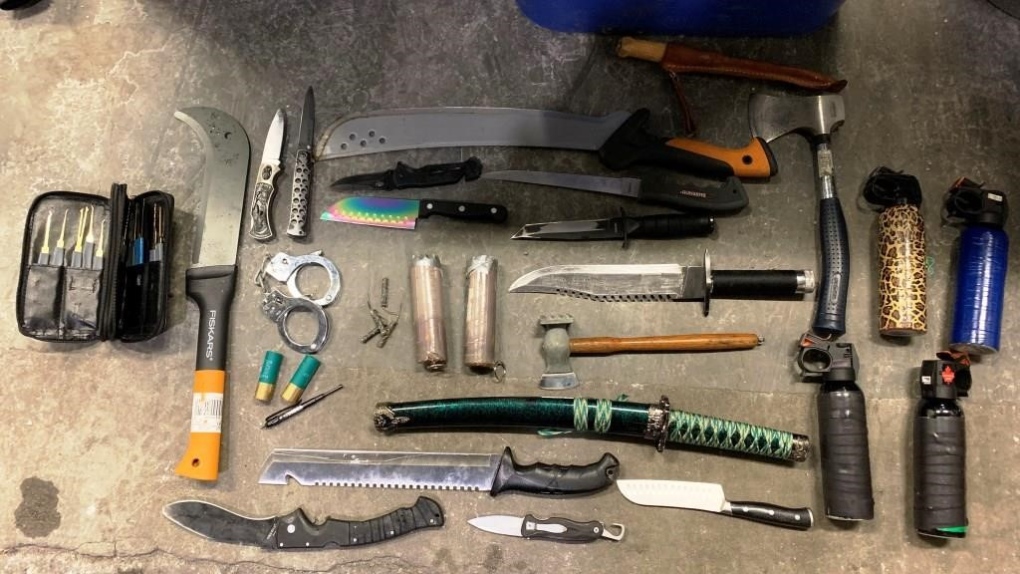 Police say they seized numerous weapons from inside a tent at Oppenheimer Park in Vancouver this week. (Vancouver Police Department)

VANCOUVER -- Police say they seized numerous weapons from inside a tent at Oppenheimer Park in Vancouver this week.

Vancouver police officers found the weapons Tuesday evening while responding to a 911 call about a domestic dispute in the park, police said in a news release Thursday.

During their response, officers saw the weapons "lying in plain view inside the tent," police said. They say they also seized "a small quantity of drugs" at the scene.

Police said the guns are being analyzed to confirm whether they are real or replicas. The other weapons and the drugs will be destroyed, police said.

"This is a unique seizure because of the size of the stash of weapons in this one location," said Vancouver Police Department spokesperson Sgt. Aaron Roed in the release.

Police said they believe the tent where the weapons were found is "a shared or communal tent to which many people have access." They said a single occupant of the tent "has not been identified."

The full list of items seized, as described by police, follows.

For months, police have maintained that the homeless camp at Oppenheimer Park has been responsible for increased crime in the Downtown Eastside.

During the first eight months of 2019, police said, more than half of all weapons seized in the City of Vancouver were seized in the district that includes the park.

In December, the Vancouver Park Board, which is responsible for park operations, announced a "decampment plan" for those living in the park. That plan included an injunction ordering campers to leave, but only once certain conditions were met.

At that time, police said crime had been decreasing in the park, something they attributed to a continued police presence in the area. Still, the park was the site of Vancouver's first homicide of 2020 in January.