Going electric: BC Transit aims to convert fleet to electric buses by 2040 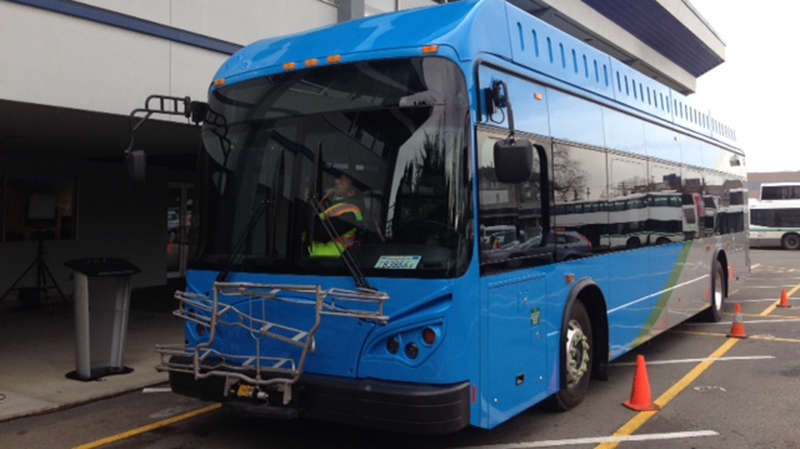 The battery-powered bus will hit Capital Region streets for a trial run in January as BC Transit gets a feel for its range and maintenance requirements. Nov. 24, 2017. (CTV Vancouver Island)

BC Transit is launching its plan to turn its entire fleet to electric buses over the next 20 years.

The transit authority says the new low-carbon fleet program aligns with the province's CleanBC plan – which looks to have the province "net-zero ready" by 2032 and have all new cars sold across B.C. be zero-emission vehicles by 2040.

BC Transit says it plans to start buying only electric heavy duty buses in 2023, with an aim of converting its entire fleet by 2040.

In all, it will replace more than 1,200 existing buses and add an additional 350 buses to its fleet.

"Transit can have its biggest impact on reducing greenhouse gas emissions by getting people out of their vehicles and onto the bus. However, we also need to transition our infrastructure, including our buses, to reduce our environmental footprint," said Aaron Lamb, BC Transit's vice president of asset management.

The transit company plans on purchasing electric buses while converting its vehicles to new and emerging low-carbon technologies, such as compressed natural gas.

"Changing that trend will be a challenge, but it's also a tremendous opportunity. Many of the actions we need to take to reduce carbon emissions - such as encouraging people to choose transit over their personal vehicles and moving to a fully electric fleet - are the exact same measures that will get us out of gridlock and make our neighbourhoods more liveable, now and for future generations," she said in a statement.

It comes in the wake of the federal government joining forces with BC Transit and the province to purchase 10 battery heavy duty electric buses to deploy in 2021.

It's not the first transit authority to explore clean energy vehicles.

TransLink purchased four battery-electric buses in May, as part of a two-and-a-half-year pilot project.