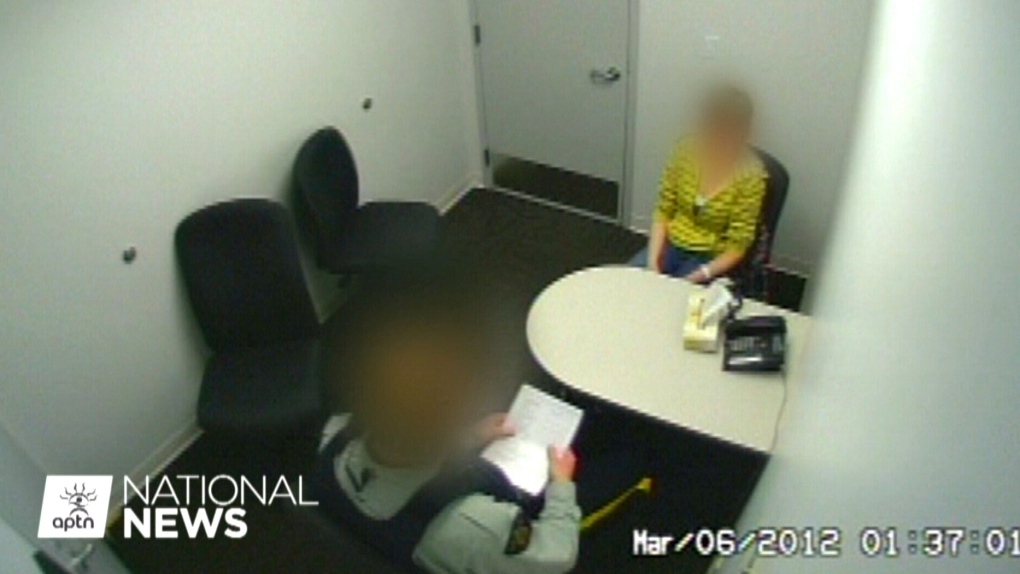 This still frame taken from a newly-released video shows a Kelowna RCMP officer questioning an under-aged Indigenous teen who was reporting a sexual assault. (APTN)

OTTAWA - A video of a Mountie interrogating a young Indigenous woman disclosing sexual abuse in B.C. foster care drives home in a “visceral way” a reality that Canadians should be shocked by and one that they need to see, former Truth and Reconciliation commissioner Murray Sinclair said Friday.

The 2012 video was released publicly by APTN this week as a result of a court proceeding and has prompted political reaction, including from Public Safety Minister Ralph Goodale, who called its contents “absolutely abhorrent.”

In the video, the officer can be heard asking her questions, including whether she was “at all turned on ... even a little bit” during the abuse she is describing.

The young woman replies that she was not, adding she was “really scared.”

The apparent attitudes and techniques on display in the video were profoundly outdated, offensive and wrong, Goodale added, stressing the RCMP and all police forces must work continuously to conduct themselves appropriately.

In an interview with The Canadian Press in Ottawa, where Manitoba's first Aboriginal judge is now a senator, Sinclair said Friday that Canadians have been told over many years that this type of treatment continues but he's not sure they believe it.

Any parent would be very quick to complain to the supervising officers over that interrogation, Sinclair said, noting the young woman was not an accused person and should have been treated more carefully and respectfully.

“I don't think people believe us until they see it ... That's what the official RCMP position is, that we don't mistreat witnesses, particularly sexual-assault victims.”

Canadians want to have faith, confidence and trust in police agencies and officers, Sinclair added.

Policing is expected to be a key theme in the upcoming report by a federal commission on missing and murdered Indigenous women and girls in Canada. It is scheduled to be released in Gatineau, Que. on June 3.

The Truth and Reconciliation Commission heard that the vast majority of Indigenous women who had been sexually victimized in residential schools felt they were not believed if they spoke to police, Sinclair said.

“They were of the view that not only did the officer not believe them but that he - and it was almost always a male - was disrespectful towards them,” he said.

“As a result, I expect that the same kind of evidence would have come out at the hearings of the missing and murdered Indigenous women and girls inquiry and so I would not be surprised that they highlight that fact again in their report.”

In 2016, B.C.'s then child representative Mary Ellen Turpel-Lafond produced a report documenting that least 109 girls were the victims of sexualized violence while in government foster care and that 74 of them were Indigenous. The case of the teen in the 2012 recording was among them.

On Thursday, she said the video is far from an isolated case, noting that provincial and federal politicians know well there has been “major difficulty” with this issue for some time.

“The heinous way in which this young person was treated, being alone in an interrogation room, being treated as though she was a criminal, not a victim, and also the poor training, the suggestion that somehow a victim of sexualized violence is enjoying the sexualized violence, this is so fundamentally offensive but is a pattern I've seen again and again,” she said.