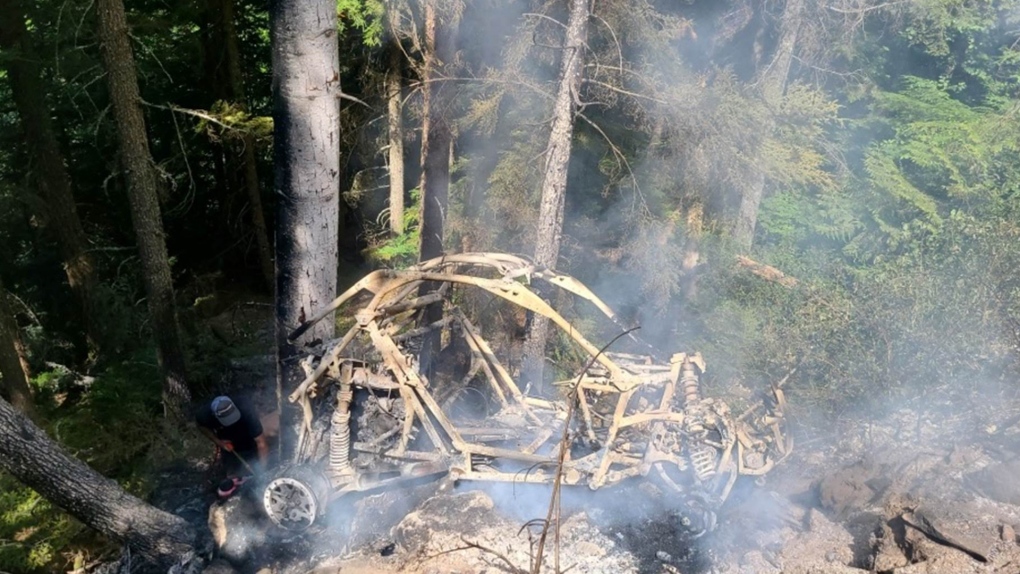 A burned out off-road vehicle is seen in this image from Squamish RCMP on July 30, 2020. Mounties say the vehicle rolled down a hill and burst into flames.

VANCOUVER -- An off-road vehicle that rolled down a hill and burst into flames sparked a large emergency response in Squamish Thursday, Mounties say.

Squamish RCMP say they were called around 2 p.m. for a report of a vehicle fire on the Stawamus Forest Service Road next to the Chief.

When police arrived, they saw that two men had rolled their backroad vehicle down the hill from the road, and it "burst into flames."

Mounties say both men were treated for injuries and taken to the hospital.

Coastal Fire crews responded to the scene and worked with Sea to Sky Gondola staff to put the fire out.

"We are expecting and preparing for a busy August long weekend and our hope is that people are safe in their adventuring and make smart decisions about where they rec and how they do it," said Sgt. Sascha Banks in a statement.

Banks said police are noticing an "increased volume" of people in the Sea to Sky region.

"This increases the pressures on our communities, emergency services, search and rescue teams, and our residents," she said. "Today, we were lucky that the fire was put out quickly and those involved weren't more seriously injured."

Crews will remain on scene to make sure the fire is out.

The road will also be closed off until the area is safe.

Squamish RCMP, Squamish Fire, and @BC_EHS are responding to a vehicle fire on the Stawamus FSR. Please avoid the area until we can ensure the fire doesn’t spread and everyone is safe. @Squamishtown #frontlinepolicing pic.twitter.com/DXhUXxkuCk