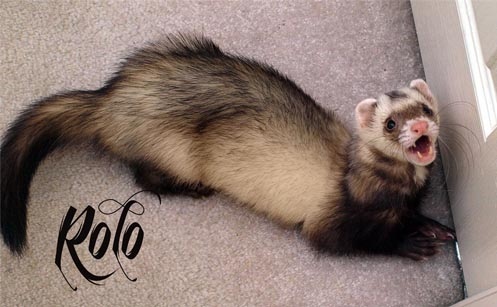 Rachel Schafli is spearheading an online campaign to allow ferret owners to bring their pets on board Air Canada and WestJet flights. This is her ferret, Rolo.

A group of ferret owners say they’re being discriminated against by Canada’s major airlines because their beloved pets aren’t able to fly with them the way dogs or cats could.

An online petition asking WestJet and Air Canada to reconsider their pet policies is being spearheaded by Rachel Schafli, a Ryerson University student flying home from Toronto to see her family in Maple Ridge, B.C., for the holidays.

In order to bring her ferret, Rolo, back to B.C., Schafli has to drop him off at an airline cargo facility 12 kilometres away from Pearson Airport.  She will pay $115 per direction to keep her pet in cargo for the cross-Canada flight.

In comparison, a cat or small dog is permitted to fly in a soft-sided carrier in the plane cabin for $50 on WestJet and Air Canada flights, although there are some holiday flight restrictions. WestJet also allows rabbits and birds in the cabin.  A larger animal can be put in checked baggage for a fee on Air Canada and Westjet flights.

“Canada’s two national airlines are refusing to allow animals on board which are quiet, essentially odourless, hypoallergenic [and] enjoy sleeping in enclosed spaces,” Schafli wrote in an email to CTV News.

WestJet and Air Canada both told CTV News they have no plans to change their policy about ferrets in the foreseeable future.

Both airlines say small pets in the cabin must be in soft-sided carriers that fit under the seat, because a hard-sided kennel could become a projectile in the case of an on-board emergency.

But ferrets could easily chew through a soft-sided carrier made of vinyl or leather, WestJet spokesperson Robert Palmer said in an email to CTV’s Steele on Your Side.

“Ferrets are members of the same family as weasels, otters, badgers, etc. and have a tendency to want to bite, chew or dig. If a ferret were to become stressed and chew through its soft-sided carrier, which wouldn’t take long, there is a risk of damage to aircraft wiring or other parts,” he said.

Ferrets are the third most common uncaged pet in North America, after dogs and cats, according to Vancouver’s Ferret Information Rescue Shelter.

The online petition asking the airlines to change their pet policies has garnered nearly 300 signatures.

Have your say: Should ferrets be allowed on board WestJet or Air Canada flights?  What about as checked baggage?