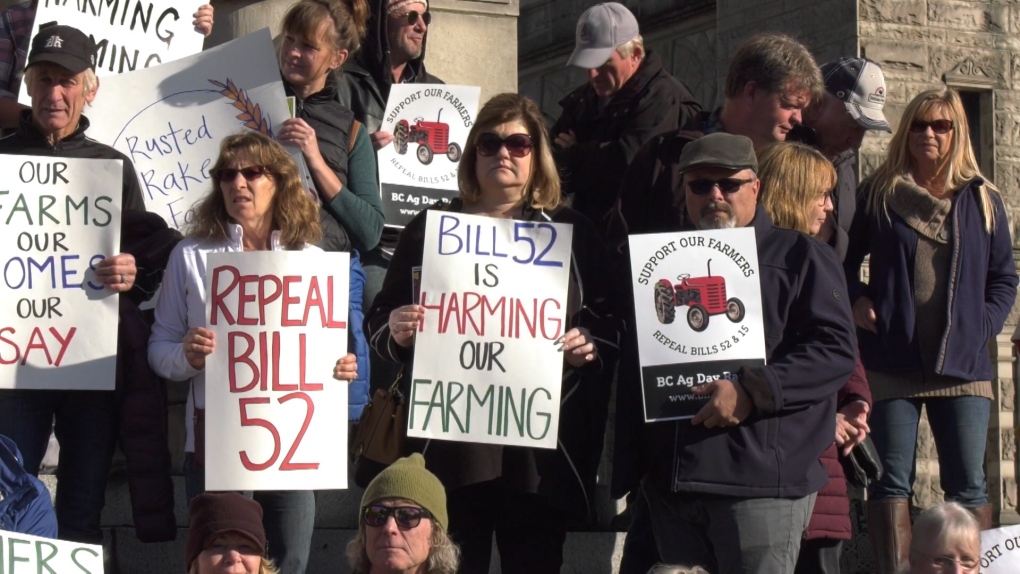 Farmers staged a protest against Bill 52 at the B.C. Legislature Monday.

VANCOUVER - Dozens of farmers rallied at the B.C. Legislature Monday to call on the provincial government to repeal a bill they say puts their livelihoods at risk.

The protesters called on Premier John Horgan and Agriculture Minister Lana Popham to repeal Bill 52, which was passed last year. The bill restricts the size of new homes on properties within the Agricultural Land Reserve to less than 5,400 sq. ft.

Another concern for farmers is the bill’s restriction of secondary dwellings on their land, which protester Meghan McPherson said has implications for insurance, mortgaging and entry-level farmers.

“This makes it more difficult for people to obtain mortgages, in an area where it’s already challenging to obtain a mortgage,” McPherson said at the rally. “Lenders consider ALR parcels high-risk to begin with, and now they’re filled with a bunch of structures that aren’t replaceable should something happen to them.”

Farmers say this restriction will make it more challenging to build non-farm use dwellings for family members, which they believe could have a negative impact on the future of family farming.

Several speakers said this would mean multiple generations of the same family may not be able to live together in the future.

Those calling on the bill to be altered have created a Facebook group called Changes to Bill 52 which currently has more than 2,600 members.

Popham said the government is listening to farmers and ranchers on these issues and defended the government’s legislation when repeatedly asked about it during Question Period Monday.

“I respect the work that farmers are doing around the province,” said Popham. “I spend a lot of time on the ground with farmers, one thing they tell me is that the policies that we’re putting in place are giving them more opportunities to do value-added to their farms.”

The BC Liberals called the legislation "punitive" in a press release, and agriculture critic and Delta South MLA Ian Paton is encouraging those opposed to the bill to sign a petition, which currently has more than 26,000 signatures.

In a statement, the Ministry of Agriculture said people who live in the ALR can build additional homes on their farmland to support their farming operations with permission from their local government and the Agriculture Land Commission. The ministry also stated that any residential buildings in the ALR that were built before the legislation was implemented can continue to use them in the same way.