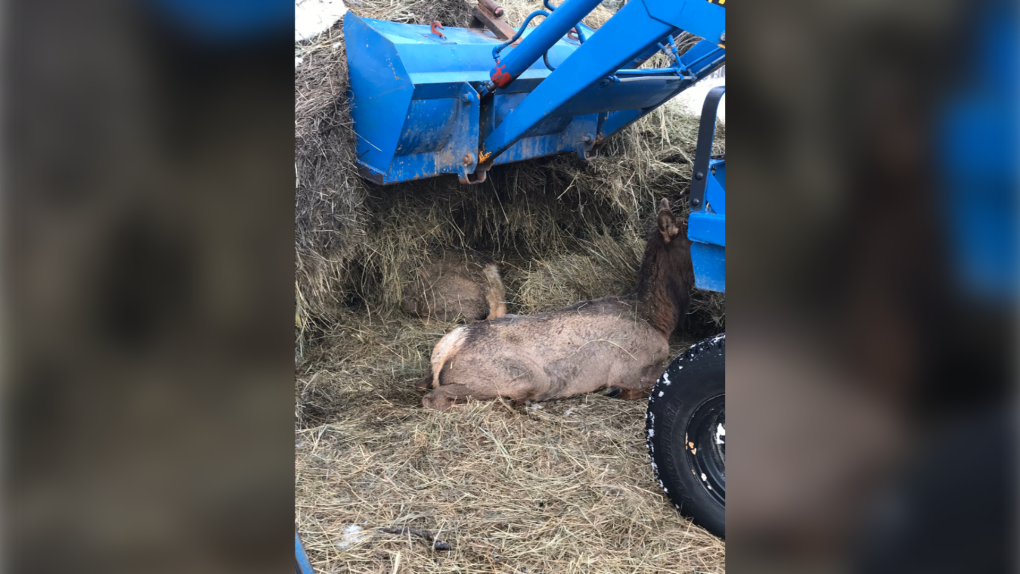 A farmer near Smithers, B.C. was able to use his tractor to help free two elk that had become trapped underneath a collapsed haystack. (Twitter/ BC Conservation Officer Service)

VANCOUVER -- A farmer was able to use his tractor to help free two elk that were trapped underneath a collapsed haystack on his farm near Smithers, B.C.

Members from the BC Conservation Officer Service were called to the farm for what was initially thought to be one animal stuck underneath some piles of hay.

"The unsuspecting farmer noticed something sticking out of his lopsided haystack and called the RAPP (Report All Poachers and Polluters) line," the BCCOS said in a statement posted to Facebook on Feb. 14.

When officers arrived, they found an elk that was almost completely covered in hay. The farmer, with help from the direction of the officers, was able to use his tractor to remove some of the hay . But as he started digging, they discovered a second elk that had been "completely buried."

Officers said they don't know how long the animals had been trapped, but both were eventually freed. They suspect the elk had been eating the haystack from one side until it eventually tipped over on them.

Conservation officers described the call as "unusual" but said that because of the farmer, it had a happy resolution.