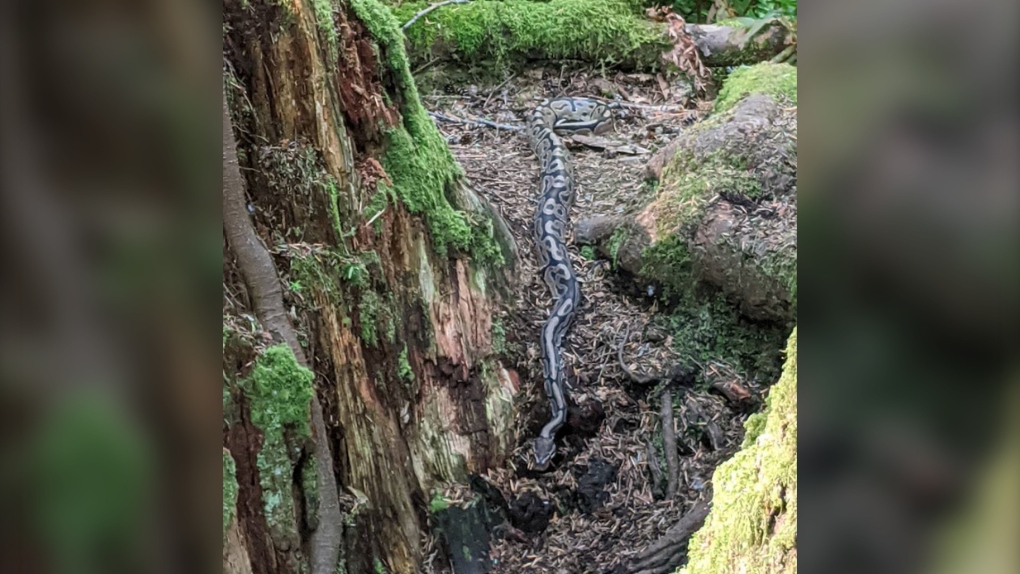 A Langley man snapped this photo of a ball python in Surrey's Tynehead Park on Tuesday. (Paul Peterson/ Facebook)

VANCOUVER -- A Langley family had an unexpected encounter with a ball python while hiking in Surrey's Tynehead Regional Park.

Paul Peterson, his daughter and parents were out for a walk around 5 p.m. Tuesday when they came across the python near the park's hatchery. Peterson says at first glance, he thought it was a garter snake but realized it was about four feet long.

"It took me by surprise," he said. "It wasn't moving a lot. I wasn't actually sure it was even alive at first."

Peterson says they were able to get close enough to take some pictures, and after a quick Google image search, the family figured they had stumbled across a ball python.

"I kept going through my head to try to decide what the risk was," said Peterson. "Obviously this isn't natural to this park, so I started wondering how it got there and how long it had been there. I started wondering if (it) could even survive out there."

Peterson believes the snake was likely an abandoned pet and reported the sighting to the City of Surrey on Tuesday night, as he was concerned about the animal's ability to survive in the park.

"I've never been in a situation like that before…I thought it was crazy," he said. "When I got home, I was like, I better call this in because I don't know if it's going to have any issues with the ecosystem…or starve to death."

Metro Vancouver spokesperson Don Bradley also believes the snake was likely abandoned and says it was captured by staff from the West Coast Reptile Education Society just after 12 p.m. Thursday.

"It has been successfully rescued and I'm sure will be placed in an appropriate setting to live out its remaining days," Bradley said.

Hastur McKay with the reptile society says the snake is now being cared for at the home of one of their volunteers.

"Since the temperature is cold, the snake didn't really go far from where it was spotted, no doubt it also found a spot that was as comfortable as possible for it," he said in an email.

McKay says ball pythons are non-venomous constrictor snakes and typically live about 20 to 30 years in captivity. They get their name from their defence mechanism of curling into balls when threatened, he added, noting that pythons in captivity primarily eat mice, rats and small birds.

He says the reptile society plans to bring the snake to a veterinarian for a checkup, as it appears to be slightly underweight. After that, it will be put up for adoption.

As for whether Peterson will return to Tynehead, he says he has no anxieties about returning, and figures the rare python sighting was just a one-off occurrence.

"That's a great park. I would definitely go back," said Peterson, who also spotted a baby owl during the same visit after walking away from the python.

"We walked down that part of the path, and there was a baby owl perched like four or five feet off the ground, just sitting there," he said. "It was the wildest park visit I've ever had."