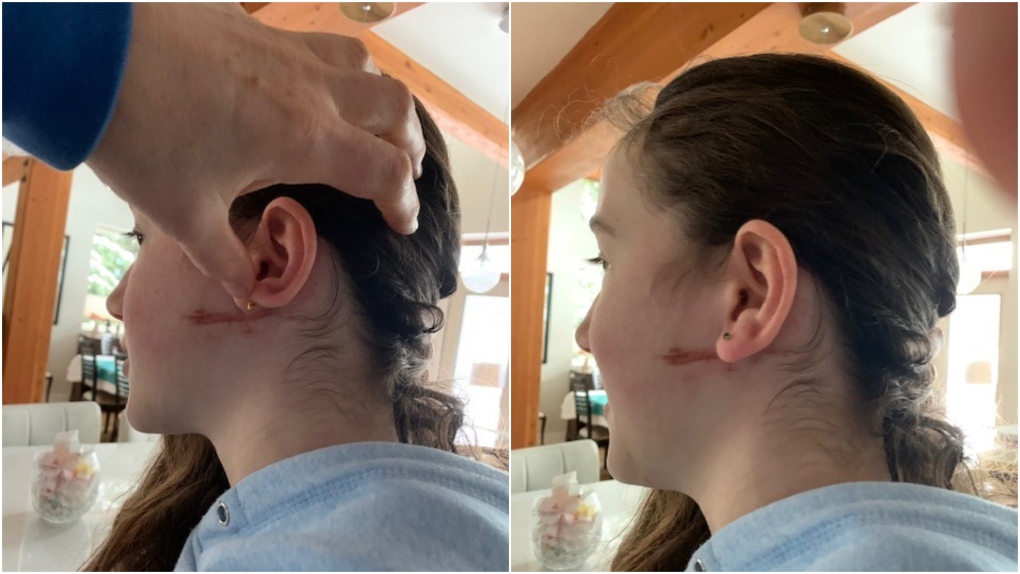 One of Carolyn Bachler's injuries is shown in a photo provided by her family to CTV News.

VANCOUVER -- The family of an 11-year-old B.C. girl who was hit by a skier then sworn at is hoping someone may know the identity of the man who left the little girl on the side of a mixed-use trail with a concussion.

Carolyn Bachler had been tobogganing on the Kadenwood ski-out near Creekside in the Whistler area on Feb. 19, when she and her friends heard a skier heading towards them.

She says they moved to the side of the trail to let him through.

“I was kind of lying down on the snow, on the bank. I was off the trail. He just came and ran over my face and cut the side of my cheek,” Bachler told CTV News Tuesday from Whistler, where the family lives. “It was full force. It’s all of his weight, plus his ski boots, plus his skis.”

The Grade 6 student says that as she lay bleeding on the snowbank, the man took things a step further.

Bachler says he'd landed in a ditch after the collision, and instead of trying to help, “he got up, started swearing at me.”

She says the man called her a bitch and used an ableist slur, before telling her to “F off.”

Her friends and two other snowboarders who were on the trail took off after the skier, but they weren’t able to catch up to him, Bachler says.

Dr. Tony Bachler, who is an anesthesiologist, says his daughter was left with a concussion, an injury to her jaw and a gash across her face and neck.

He also questions why the skier didn’t stay to help his daughter.

“I think that was the worst part of it,” Tony Bachler told CTV News. “There was trauma, mostly psychological trauma that was caused to Carolyn.”

He says the trail where it happened is mixed-use.

“The users would be dog walkers, walkers, people that are tobogganing or sledding, and then skiers,” Bachler said.

“People who use it understand it you have to watch for other people and be courteous.”

RCMP officers are investigating the incident, and Tony Bachler returned to the area where it happened with police on Tuesday.

In the meantime, his daughter is recovering from her injuries, and has returned to school.

But Carolyn Bachler says she isn’t yet ready to return to the trail anytime soon.

The Bachlers say the man who hit the girl is believed to be about 5’10” with brownish-orange facial hair and an Australian accent. He was not carrying ski poles and was wearing a greyish ski suit with orange skis.