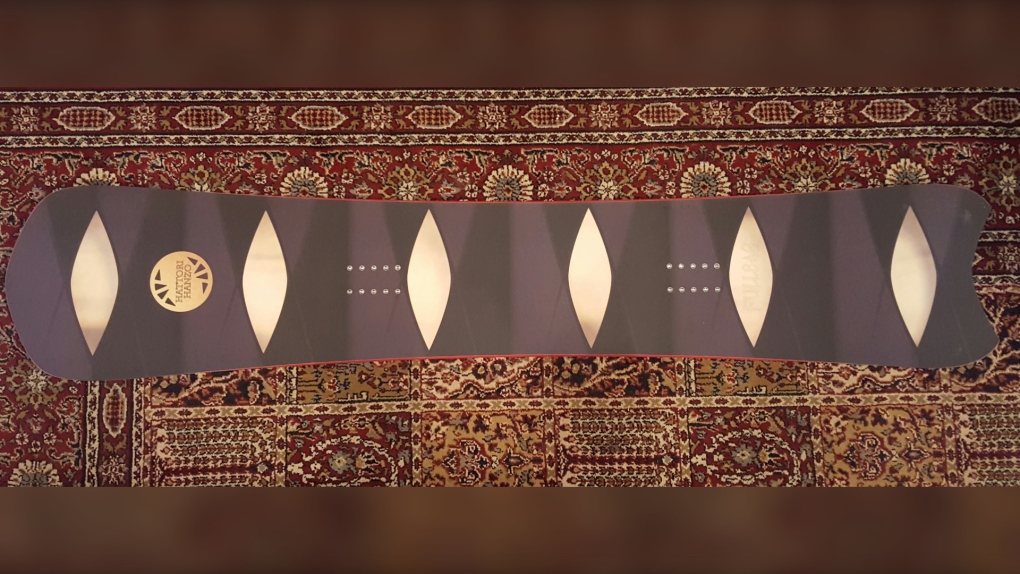 Police in West Vancouver have reunited a local snowboarder with some unique gear, nearly two years after it was stolen from a vehicle on Cypress Mountain. (West Vancouver Police Department)

VANCOUVER -- Police in West Vancouver have reunited a local snowboarder with some unique gear, nearly two years after it was stolen from a vehicle at Cypress Mountain Resort.

The snowboard was reported missing in February 2019, and was located last month when its rightful owner noticed it for sale online, according to a news release from the West Vancouver Police Department.

The board is "extremely rare and easily identifiable," according to its owner, police said. They didn't provide a description of the board, but photos shared with CTV News Vancouver show that the board is black with a gold diamond pattern on its surface and a "Hattori Hanzo" decal.

The board in question appears to be a Fullbag Diamond Blade with a design that is no longer available on the manufacturer's website.

West Vancouver police responded to the ad and set up a meeting with the seller in Richmond on Dec. 16.

Officers recognized the board through its unique design and arrested the seller, police said.

A 38-year-old Richmond man is now facing charges for possessing stolen property and is scheduled to appear in court in March, according to West Vancouver police.

“We were very happy to return this property to its rightful owner,” said department spokesperson Const. Kevin Goodmurphy in the release. “It clearly held sentimental value.”

A previous version of this story incorrectly identified the snowboard as being made by the manufacturer Hattori Hanzo. In fact, it is made by Fullbag.