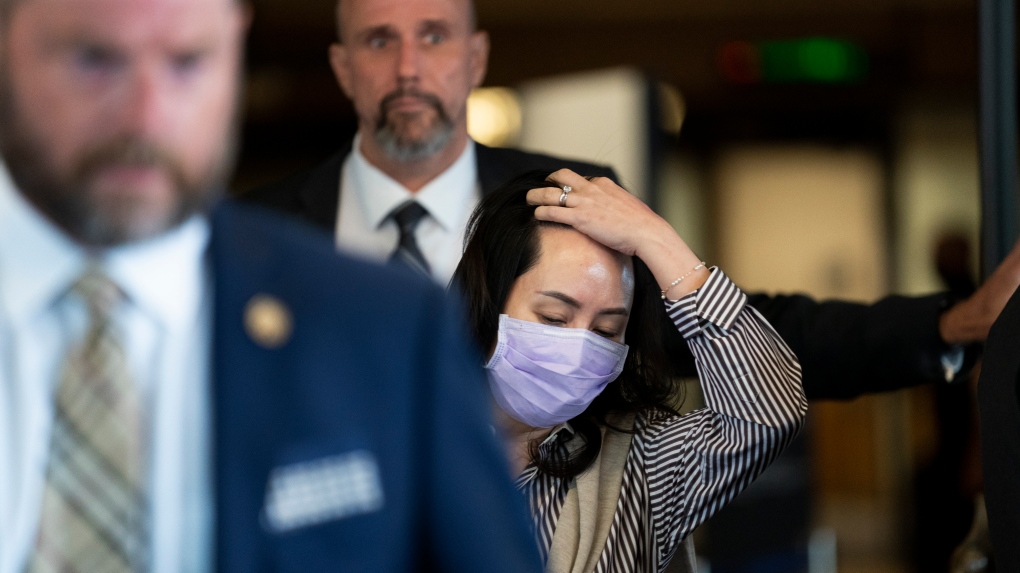 Meng Wanzhou is surrounded by security as she leaves B.C. Supreme Court in Vancouver, Monday, September 28, 2020. THE CANADIAN PRESS/Jonathan Hayward

VANCOUVER -- Lawyers for Huawei executive Meng Wanzhou are wrapping up arguments today over the admissibility of evidence in her extradition case as they contend the United States misled Canadian officials in summarizing the case against her.

Meng is accused of misrepresenting Huawei's relationship with Skycom during a 2013 PowerPoint presentation to HSBC, putting the bank at risk of violating U.S. sanctions against Iran.

She and Huawei have denied the allegations and are fighting against her extradition to the United States to face the charges.

Lawyers for the attorney general are expected to present the federal government's response once the defence wraps up.

Defence lawyer Frank Addario told a B.C. Supreme Court judge that the United States describes the PowerPoint presentation as the “cornerstone of its case,” yet only describes part of the presentation in its case summary.

He says additional slides in the same presentation show that Meng clearly described Huawei and Skycom as partners that both did business in Iran, and the bank had the information it needed to navigate trade laws.

“No banker would leave that meeting thinking that Huawei had distanced itself from Skycom in any way material to U.S. sanctions consequences for the bank,” Addario says.

On Monday, defence lawyer Scott Fenton told the judge that the summary of allegations used to justify Meng's arrest could be considered an abuse of process.

The judge is considering whether the argument merits proceeding to a three-week hearing starting in February centred on allegations of abuses of process related to Meng's arrest.

This report by The Canadian Press was first published Sept. 29, 2020.