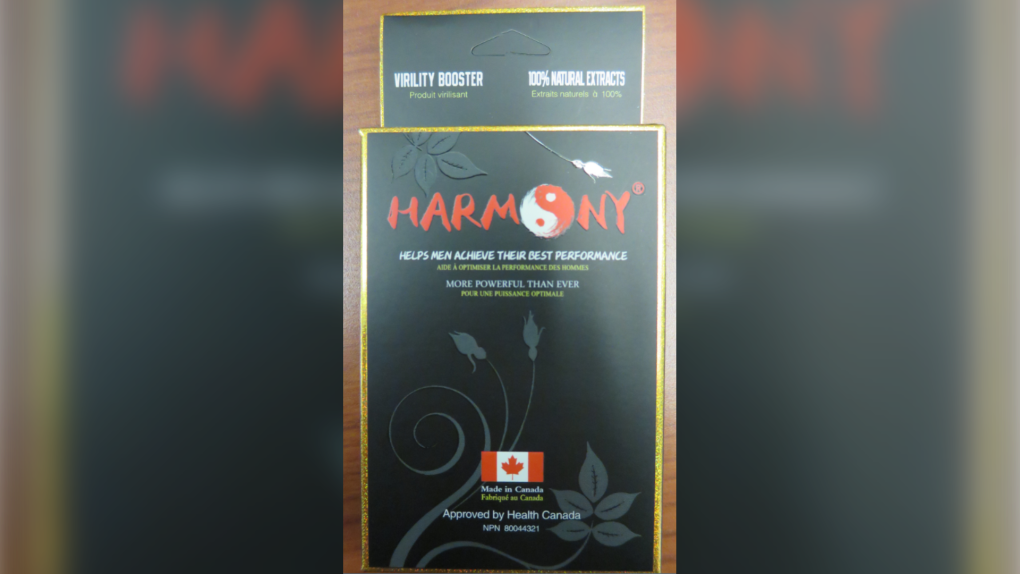 The package of an erectile enhancement supplement called 'Harmony.' The product, which was marketed as a herbal capsule, was found to contain about three times the maximum daily dosage of tadalafil, according to a Health Canada advisory on March 5, 2021 (Supplied/Health Canada).

VANCOUVER -- A men’s sexual enhancement supplement has been seized from the shelves of a string of adult stores in Metro Vancouver after it was found to contain three times the maximum daily dosage of a restricted prescription drug used to treat impotence, according to Health Canada.

The regulator is advising anyone who has been using Harmony capsules to stop taking them and seek medical attention if they have concerns about their health.

The drug was being promoted as an herbal remedy and sold at four sex shops in B.C.’s Lower Mainland as a treatment for erectile dysfunction. Its packaging describes the product as “naturally derived,” and boasts that it is “approved by Health Canada.”

But recent testing from Health Canada found that it actually contains a drug called tadalafil.

The product had been licensed in Canada since 2013, according to Canada’s natural health product database. According to its listing, the Harmony capsules, product number 80044321, were supposed to contain the herbal medicine of “Panax ginseng” and were to be used to “help enhance physical capacity” in instances of “physical stress” and to “support cognitive function” in cases of “mental stress.”

Its licence, held by a company called MFH International Enterprise Inc., has now been suspended. Tadalafil can have dangerous interactions with other medications and should only be used under the supervision of a health-care professional, according to the Health Canada advisory.

“In Canada, the maximum dosage authorized in prescription tadalafil for erectile dysfunction is 20 mg per dose. Harmony samples were found to contain approximately three times that amount per capsule,” it reads.

Tadalafil can have dangerous interactions with nitrate drugs such as nitroglycerine and the two drugs should never be taken at the same time.

“(The interaction) can cause a potentially life-threatening decrease in blood pressure,” reads the advisory.

“Individuals with heart problems are at increased risk of cardiovascular side effects such as heart attack, stroke, chest pain, high blood pressure and abnormal heartbeat,” it continues.

Other possible side effects of tadalafil can include headache, facial flushing, indigestion, dizziness, abnormal vision, and hearing loss.

CTV News Vancouver reached out to all four stores by phone. The only websites which appear to be linked to any of the stores are either blocked by an internet security warning or contain error messages. Only one store answered its phone. CTV News will update this story if it hears back from a store representative.