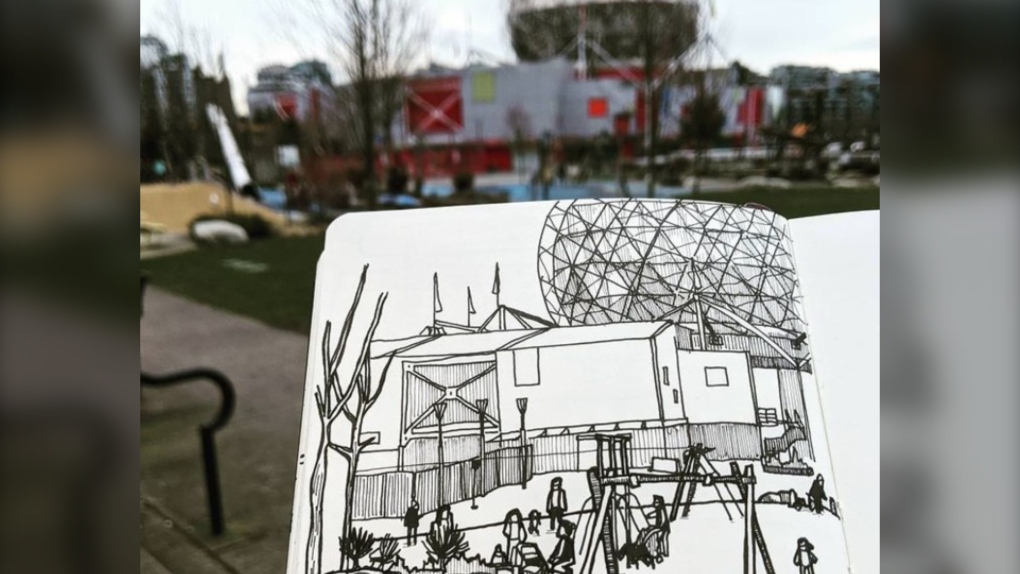 Artist Nishant Jain, a recent transplant from the U.S., is getting to know Vancouver through his art practice of sketching places and people in public and sharing the drawings on social media (@thesneakyartist/Instagram).

VANCOUVER -- He’s quiet, he’s low-key, and he’s armed with nothing but a sketch pad, a fountain pen, and an artistic eye.

Artist Nishant Jain, a recent transplant from the U.S., is getting to know Vancouver through his art practice of sketching strangers in public and sharing the drawings on social media.

“I like the idea of being a fly on the wall … (and) just observing life as it happens” said Jain in a phone interview with CTV News Vancouver.

Observing, sketching, observing, sketching — Jain positions himself in Vancouver’s coffee shops, street corners, park benches, and wherever else life is unfolding. He sees art everywhere he goes, but the art never sees him.

“If I see somebody doing something and that moment feels artistic to me, all I’m doing is noting it down as quickly as I can before it disappears,” he said.

Those fleeting glimpses of faces and movements are depicted on paper and published on Instagram as @TheSneakyArtist. They are Jain’s inspiration and lifeblood, a person whose artistic calling was unleashed only after he moved continents, left a career in mechanical engineering, and challenged himself to do something new.

“It’s like being able to talk for the first time in my life,” said the self-taught sketcher.

Jain and his wife arrived in Vancouver from Chicago only two months ago. Although originally from India, he’s lived in several other cities across the globe.

But it was in Chicago that he discovered the artistic movement called urban artistry. Much of his sketches involve quietly interpreting others, and quickly and unobtrusively capturing them as they interact with their surroundings. In his sketches, Jain zeroes in on one or two aspects of whomever he’s drawing.

“Just by simply noting one important feature about somebody it renders them recognizable,” he said.

It takes him only a few minutes of pen to paper to capture that fleeting moment before it’s gone forever, he said.

While the first two weeks of his new life in Vancouver in January were in quarantine, it did not stop him from seeking out subjects — he simply stuck his head out the window as an adventure. When he saw someone coming to feed the birds nearby every morning, he spoke to her, so to speak.

“Even though I’ve never seen her face, it was the first person I observed doing something,” Jain said. “That was the first Vancouver person that I sort of connected with.”

When his quarantine was over, his first stop was a Tim Hortons in Downtown Vancouver, at Davie and Howe.

“That’s what everyone said to me as I was leaving Chicago – ‘Now you’re going to be drawing at a Tim Horton’s instead of a Starbucks,” he said.

Since then he’s been using his sketching to acclimate to the city, just as he did in Chicago and other cities he’s lived the last four years. Jain thinks that so far no one has noticed him in the act of sketching, although he says a few have found his Instagram page and recognized themselves with delight.

“These are all such foreign parts of the world for me that my art was a way for me to kind of connect with this landscape and try to understand the people by drawing them,” he said.

“(To) try to understand how the city works by sitting somewhere observing things and making these drawings.”

Jain’s Instagram page has over 7,000 followers, and he’s building a freelance career through commissions, as well as hosting a weekly podcast for other urban artists to connect. One of his goals is to encourage and inspire others with hidden artistic talent to just get out and do it, as he did — regardless of skill or schooling, and create a new language and with the voice of their pen.