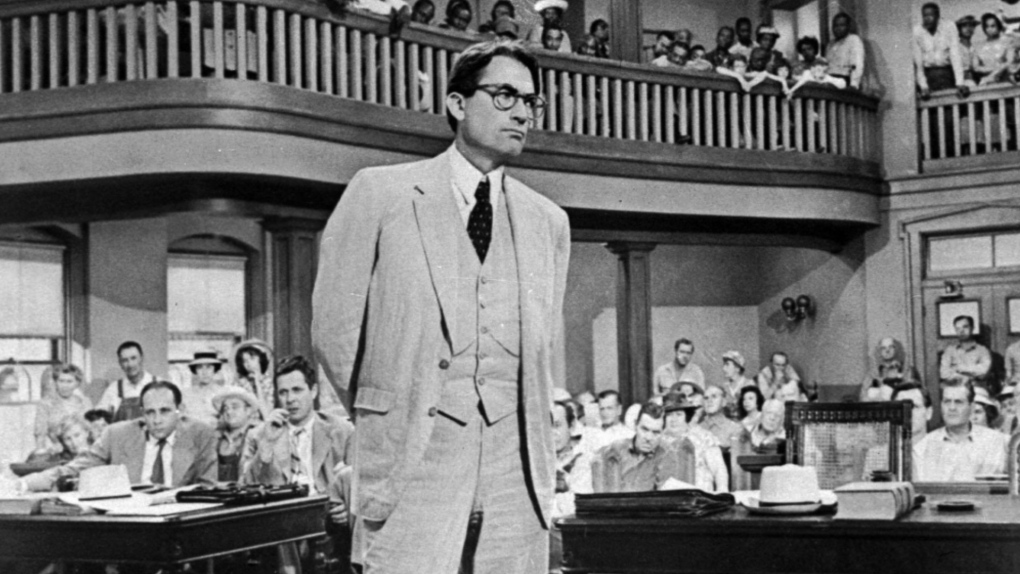 Actor Gregory Peck is seen as attorney Atticus Finch, a small-town Southern lawyer who defends a black man accused of rape, in a scene from "To Kill a Mockingbird." (AP / Universal, File)

VANCOUVER -- A B.C. elementary school teacher has been suspended after showing his young students the movie "To Kill a Mockingbird."

Andrew Michael Dennis was working in the Prince George school district when he screened the movie for his Grade 6/7 class back in September 2018, according to a consent resolution agreement published online this week by the B.C. Commissioner for Teacher Regulation.

Officials deemed the movie inappropriate for children of that age given that it deals with themes of sexual assault and racism, including the repeated use of racial slurs. It also had no relevance to the class's curriculum.

"In the B.C. curriculum, the book 'To Kill a Mockingbird' is listed as a secondary school-level resource for Grades 10 and higher," the commissioner wrote in the agreement.

That was just one of several incidents involving Dennis that prompted a reprimand from officials and a one-day suspension of his teaching certificate.

The same year, the elementary school teacher showed his students the movie adaptation of "The Hobbit" – which also had no part in the curriculum – and had them read the short story "The Lottery," which is normally taught to students in Grade 11 or 12.

The story is about a small town of Pagans who stone someone to death each year to ensure a good harvest. After reading the "The Lottery," Dennis also showed his class a short film adaptation and then had students participate in a dodgeball game inspired by the story.

"Specifically, students drew pieces of paper out of a hat and the students who drew a piece with a dot on it had dodgeballs thrown at them," according to the consent agreement.

The following year, the district also issued a letter of expectation after Dennis was working as a teacher on call and allowed several kindergarten students to wander the hallway unsupervised.

In all, the commissioner found Dennis had "failed to establish a positive learning environment by using material that was not age-appropriate," and did not "model appropriate behaviour expected of an educator."

On top of his suspension, he was ordered to complete a course at the Justice Institute of B.C.