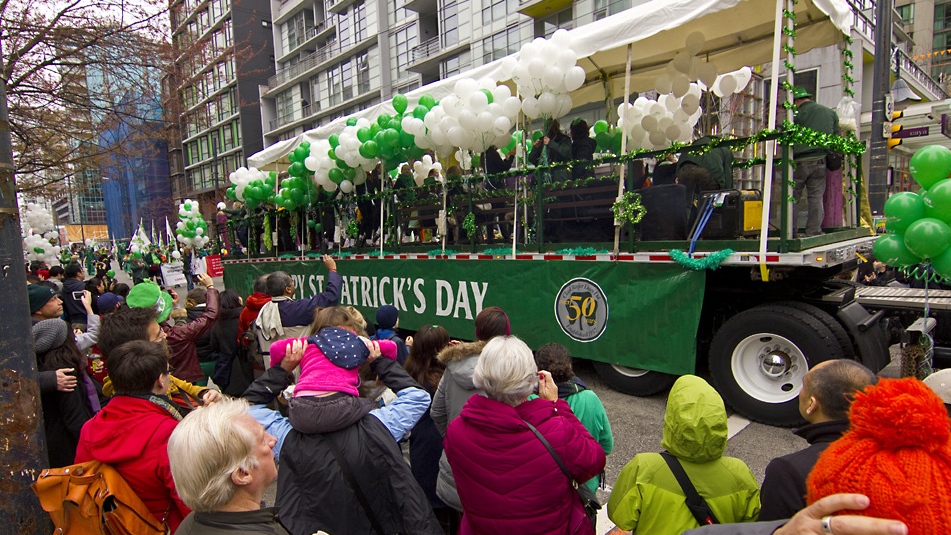 A St. Patrick's Day parade in Vancouver is seen in this file photo.

VANCOUVER -- It's usually a day synonymous with drinking green beer in bars, but now, places that might be crowded for St. Patrick's Day festivities are seen as a breeding ground for germs.

The province has not mandated restaurant and bar closures amidst growing COVID-19 concerns, but Vancouver Mayor Kennedy Stewart said people should think twice about going out.

"Right now, use your own common sense," he said at a news conference Monday. "If you don't think that the place you're going, you can keep a safe social distance you shouldn't go – and drink a Guinness at home."

Stewart also recommended that restaurant and bar owners limit their capacities to ensure patrons can maintain social distance of at least a metre.

Carlos O'Bryan's Neighbourhood Pub is at least one establishment following that recommendation and anticipates this year's St. Patrick's Day will be a "much mellower one."

General manager Dave Rundle said a security company has been hired to ensure there's no more than 50 people inside at once, allowing patrons enough space to create that social distance.

Rundle said there are no hard feelings towards the mayor's comments, which discourage people from going out to bars.

"I understand it, we're all in the same boat. So the sooner we get over this, the better."

Not even the luck of the Irish can keep the world's largest St. Patrick's Day parade afloat; Dublin announced the event was being cancelled one week ago.

CelticFest Vancouver was also forced to cancel this past weekend's family day event at the art gallery.

"We were devastated. We put a lot of effort and work into this family day event...and it costs a lot of money to prepare for it, but it is what it is, it's out of our control," said festival president Harry Cussen.

CelticFest has one more event scheduled for March 22, when Altan, a band from Ireland, is supposed to come and perform, but that will likely be cancelled as well.

On Monday, Prime Minister Justin Trudeau announced Canada is closing its borders to most non-citizens, with the exception of Americans.