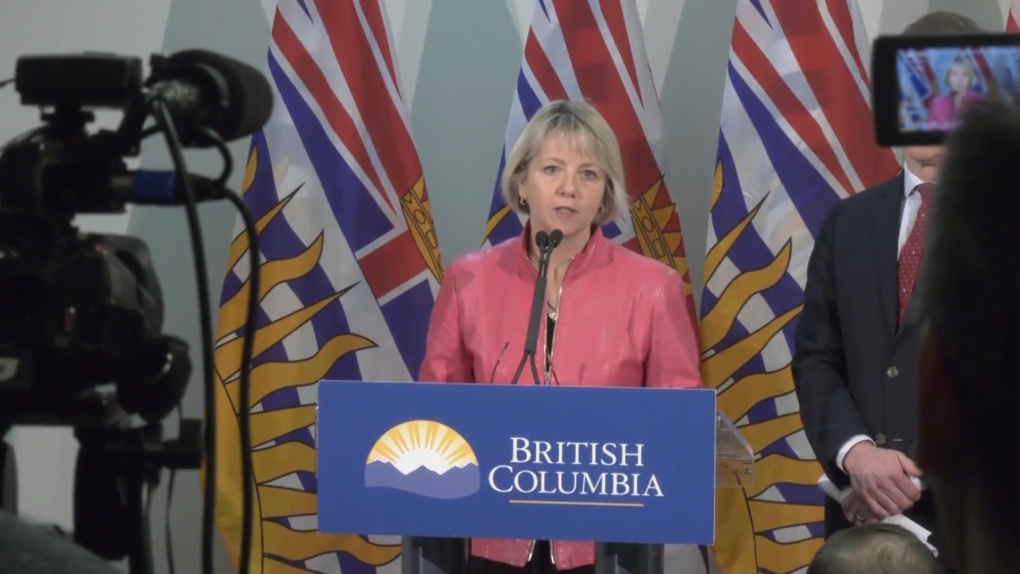 B.C.'s provincial health officer Dr. Bonnie Henry is seen at a news conference at the B.C. Centre for Disease Control on Jan. 28, 2020.

VICTORIA -- At the end of a stark news conference during which Dr. Bonnie Henry wiped tears as she broke the news confirming diagnosis of two cases of COVID-19 transmission at a North Vancouver long-term care home, she worried she was about to frighten her parents.

British Columbia's provincial health officer paused to compose herself before warning that the elderly in Canada are at most risk from COVID-19 and she urged everybody to do what they can to protect the vulnerable, which may mean staying away from parents and grandparents.

“I'm hopeful you won't play the emotional part of me too much because my parents will be very upset,” she said at the conclusion of Saturday's COVID-19 news briefing in Vancouver. “My mother already tells me I look very tired.”

Henry's tears, compassion and resolve to track down and break COVID-19 are being called a galvanizing moment in Canada's fight against the global virus, say colleagues and friends who know and work with her.

“What can I say, it's a very difficult time and I'm feeling for the families and the people dealing with this right now,” said Henry, whose excellent communication skills allow her to come across as everybody's favourite and trusted aunt.

“She is an incredibly thoughtful and compassionate human being, as I think she demonstrated recently,” said Dr. Perry Kendall said Sunday.

Henry, who replaced Kendall as B.C.'s chief health officer, was appointed in February 2018.

Kendall said Henry is an experienced virus hunter who has battled SARS, Ebola, H1N1 and polio during her career.

“Dr. Henry was on the front lines in Toronto in 2003, has been in the front lines of Ebola outbreaks in West Africa, is a co-author of the Canadian Pandemic Plan and was key to the responses to both H1N1 and the 2014 Ebola response,” he said.

Kendall said Henry headed the B.C. Centre for Disease Control on an acting basis during H1N1 and is the author of “Soap and Water and Common Sense,” a guide to staying healthy in a microbe-filled world.

Kendall, who was B.C.'s chief health officer when the province declared a public health emergency over the ongoing illicit opioid overdose crisis, said he understands the immensity of the job Henry faces, but she's well-suited for the challenge.

“Having been there myself, I know the pressures and the second guessing and the stresses of having a constantly changing situational assessment to which to respond and to working in a very complex federal-provincial environment,” he said.

Henry, a public health and preventive medicine specialist, joined Toronto Public Health in September 2001 and in 2003 was the operational lead in the response to the SARS outbreak in Toronto.

She worked internationally, including with the World Health Organization and UNICEF on a polio eradication program in Pakistan and to control the Ebola outbreak in Uganda. Henry is an associate professor at the University of B.C.'s faculty of medicine.

She said her experiences with SARS, Ebola and H1N1 give her strength as the COVID-19 battle unfolds, but they also bring out her compassion for health workers and the public at large.

“I went through SARS,” said Henry. “I've been through Ebola. I've been through the pandemics in 2009 and I just know how stressful it is for the health-care system, for my colleagues and for families who are dealing with this.”

“One of the things Dr. Henry has brought to the table for us and for me, having gone through these experiences in the past, having met with people who have been affected by SARS and by Ebola, having treated those people, having lived through that, are real experiences and I believe strongly they are a source of strength,” he said.

He said she was B.C.'s deputy chief medical health officer while he was minister and she was a stalwart back then.

“She is the voice of reason and calm,” he said. “She is capable of handling great amounts of pressure, but in a way that gives you confidence she is in control,” Lake said.

This report by The Canadian Press was first published March 8, 2020.