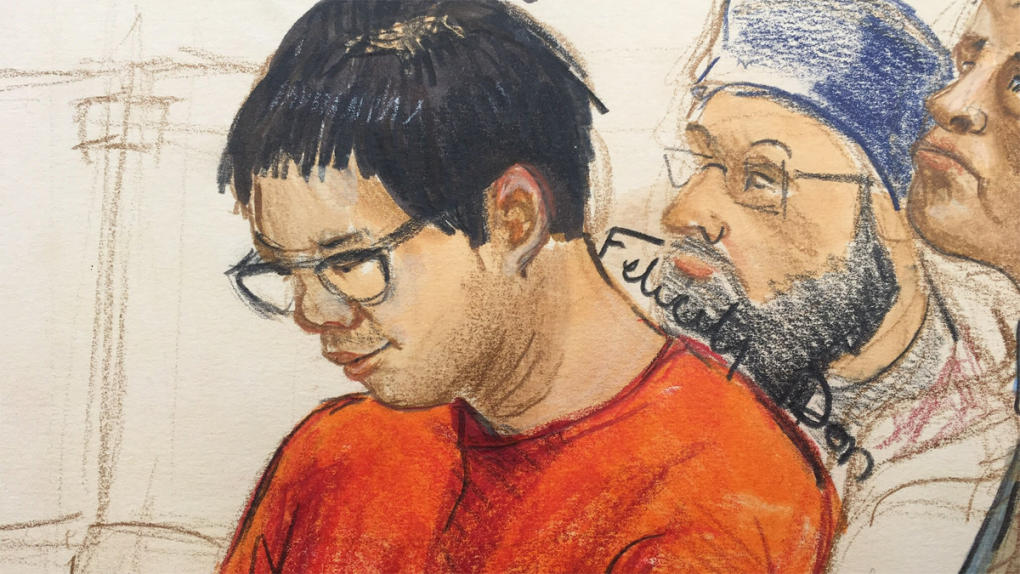 VANCOUVER -- Crown prosecutors asked a judge in a sentencing hearing Wednesday to put Rocky Rambo Wei Nam Kam behind bars for life, with no parole for 50 years, for the gruesome double murder of a Vancouver couple.

Being behind bars without parole for half a century would put the 25-year-old’s sentence among the top sentences in the country, which is deserved because of the horrifying nature of the crimes against two randomly selected Vancouver citizens, Crown lawyer Daniel Mulligan told the court.

“Mr. Kam viciously murdered two innocent strangers for no other reason than to gratify his deviant impulses,” Mulligan said, adding that Kam didn’t seem to display any remorse.

“His matter of fact demeanour is in my submission chilling and reflects on his character and his prospects for rehabilitation and the need for the protection of the public,” he said.

Kam’s lawyer, Glen Orris, said he doesn’t doubt that the murders in 2017 of Dianna Mah-Jones, 64, and her husband, 68-year-old Richard Jones, is a horrendous crime.

But he said that 50 years without parole would mean Kam could not even apply until he was 75 years old, which means there is no chance for Kam to be rehabilitated in prison. Such a sentence was impossible until the Harper government changed the rules to allow for consecutive sentences in 2011, he said.

Kam was found guilty of two counts of first-degree murder last month. He faces a minimum of 25 years without parole. But a legal change in 2011 under the Harper government, called the “Act for Ending Sentence Discounts for Multiple Murders,” allowed judges to stack parole ineligibilities consecutively in certain circumstances.

One question Justice Laura Gerow will wrestle with is whether the two murders were the same criminal act. If they were, Kam would face overlapping sentences of 25 years without parole.

But if those two murders were different criminal acts, the judge could decide Kam faces consecutive sentences, meaning his parole ineligibility would rise to 50 years.

The court heard there was not a lot of precedent for the consecutive sentences. For example, Alexandre Bissonette got 40 years without parole for killing six men in a Quebec City mosque. The longest sentence so far was 75 years without parole, given to Justin Borque, who killed three RCMP officers and wounded two others.

Family and friends didn’t speak with the media outside court. Some victim impact statements were read in court, with many testifying their lives had changed forever.

“We cry when we think about what they went through…what dreadful pain, anguish and helplessness must they have felt? Did you not see the fear in their eyes? Did you not feel pity?” wrote friends Cheryl and Krien Hundal.