A helicopter operator with a “soft spot for dogs” came to the rescue of a huge family pet after it became dog-tired and wound up stuck on a popular trail.

Fraser, a 120-pound yellow Labrador retriever, and his owner were hiking Norvan Falls Thursday when the friendly pooch cut his paws, became totally exhausted and was unable to walk back on his own.

North Shore Rescue was alerted after passing hikers noticed the dog in distress and alerted Lynn Headwaters staff when they returned to the trailhead.

A plan to rescue the panting pooch by air was hatched after rescue members reached out to a dog-loving helicopter company.

“NSR contacted Talon Helicopter’s owner Peter Murray and informed him of the situation. Peter has a soft spot for dogs and graciously offered one of his helicopters free of charge,” North Shore Rescue members said in a post on their website.

Helicopter pilot Jim Stibbard flew searchers to a helipad in the area so they could hike in to meet Fraser and his owner.

The waiting dog was put on a stretcher and carried three kilometres to the waiting chopper.

Searchers report everyone involved in the rescue – two and four legged alike – are safe and sound.

“The crew was able to evacuate just before dark and all humans and canines were out safely,” North Shore Rescue said. 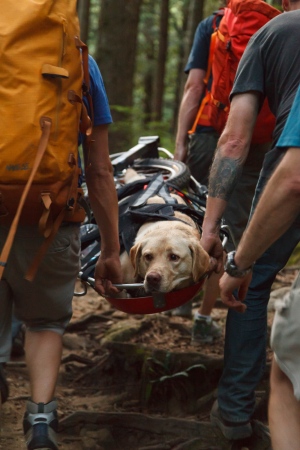